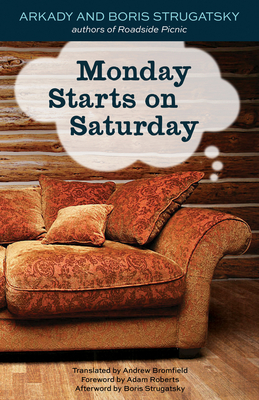 Sasha, a young computer programmer from Leningrad, is driving through the forests of Northwest Russia to meet up with some friends for a nature vacation. He picks up a couple of local hitchhikers, who persuade him to come work with them at the National Institute for the Technology of Witchcraft and Thaumaturgy, or NITWiT. The adventures Sasha has in the largely dysfunctional Institute involve all sorts of magical beings and devices—a wish-granting fish, a talking cat who can remember only the beginnings of stories, a sofa that translates fairy tales into reality, a motorcycle that can zoom into the imagined future, a hungry dog-size mosquito—along with a variety of wizards (including Merlin), vampires, and petty bureaucrats.
First published in Russia in 1964, Monday Starts on Saturday has become the most popular Strugatsky novel in the authors’ homeland. Like the works of Gogol and Kafka, it tackles the nature of institutions—here focusing on one devoted to discovering and perfecting human happiness. By turns wildly imaginative, hilarious, and disturbing, Monday Starts on Saturday is a comic masterpiece by two of the world’s greatest science fiction writers.

Arkady and Boris Strugatsky were famous and popular Russian writers of science fiction, with more than twenty-five novels and novellas to their names, including Roadside Picnic, Hard to Be a God, The Doomed City, The Inhabited Island, The Snail on the Slope, The Dead Mountaineer’s Inn, and Definitely Maybe. Their books have been widely translated and made into a number of films.


Praise For Monday Starts on Saturday…

“Monday Starts on Saturday is not just an ingenious and gripping read but simply a delight from start to finish. . . . This is a novel with which to fall in love.” —Adam Roberts, from his foreword

"This melding of bureaucracy and the numinous is highly enjoyable and impossible to compare to any other work."—Publishers Weekly

“A comic commentary reflecting Russia of the 60s, the Strugatsky brothers wove a clever tale that made it one of the most popular books in their country, ever.”—Geeks of Doom
or support indie stores by buying on
Copyright © 2020 American Booksellers Association