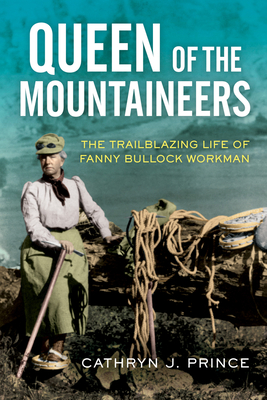 Queen of the Mountaineers

Fanny Bullock Workman was a complicated and restless woman who defied the rigid Victorian morals she found as restrictive as a corset. With her frizzy brown hair tucked under a helmet, Workman was a force on and off the mountain. Instrumental in breaking the British stranglehold on Himalayan mountain climbing, this American woman climbed more peaks than any of her peers and became the first woman to map the far reaches of the Himalayas and the second to address the Royal Geographic Society of London, whose past members included Charles Darwin, Richard Francis Burton, and David Livingstone. Her books—replete with photographs, illustrations, and descriptions of meteorological conditions, glaciology, and the effect of high altitudes on humans—remained useful decades after their publication. Paving the way for a legion of female climbers, Workman's legacy lives on in scholarship prizes at Wellesley, Smith, Radcliffe, and Bryn Mawr.Author and journalist Cathryn J. Prince brings Fanny Bullock Workman to life, revealing how she navigated the male-dominated world of alpine clubs and adventure societies as nimbly as she navigated the deep crevasses and icy granite walls of the Himalayas. Queen of the Mountaineers is the story of one woman's role in science and exploration, breaking boundaries and charting frontiers for women everywhere.

Praise For Queen of the Mountaineers: The Trailblazing Life of Fanny Bullock Workman…

"In Queen of the Mountaineers, Cathryn J. Prince transports readers to an era when explorers traversed continents by yak and goatskin boat, when mountains were still unmapped and unmeasured, when climbers braved the elements with rudimentary gear, and when the hard-earned, high-altitude triumphs of those like Fanny Bullock Workman were presented with the caveat the climber was a woman.” —Carolyn Porter, author of Marcel’s Letters

"Cathryn J. Prince presents legendary adventurer and climber Fanny Bullock Workman, a fascinating champion for women's rights who resisted expectation and refused to conform to gender roles. Through Fanny's fascinating story, Prince beautifully archives the heights achieved by our foremothers." —Ruta Sepetys, author of Between Shades of Gray and Salt to the Sea


"This very well researched and written biography brings Fanny's trail-blazing accomplishments to a new generation of climbers—both women and men—as well as to armchair mountaineers." —Arlene Blum, author of Annapurna: A Woman's Place and Breaking Trail: A Climbing Life


"[This] engaging and rigorously reported account of Fanny Bullock Workman's impressive life invites the reader to follow this brave and restless woman up the world's tallest mountains, both geological and cultural. What a read!" —Ben Montgomery, author of Grandma Gatewood's Walk and The Leper Spy

“Queen of the Mountaineers will inform scholars and delight mountaineers and armchair travelers with its rich and detailed descriptions of local people, global customs, and the dangers of traveling abroad at the turn of the twentieth century.” --Foreword Reviews

“an insightful biography of the trailblazing Workman.” --Climbing

Cathryn J. Prince is the author of American Daredevil, Death in the Baltic, and Shot from the Sky. She has worked as a correspondent for the Christian Science Monitor in Switzerland and in New York, where she reported on the United Nations, and is a frequent contributor to The Times of Israel.
Loading...
or support indie stores by buying on
(This book is on backorder)