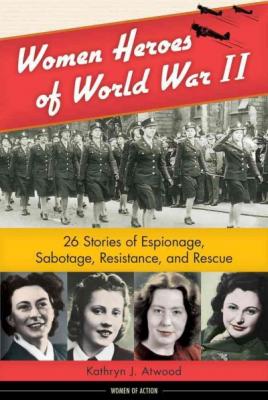 26 Stories of Espionage, Sabotage, Resistance, and Rescue (Women of Action)

Noor Inayat Khan was the first female radio operator sent into occupied France and transferred crucial messages. Johtje Vos, a Dutch housewife, hid Jews in her home and repeatedly outsmarted the Gestapo. Law student Hannie Schaft became involved in the most dangerous resistance work--sabotage, weapons transference, and assassinations. In these pages, young readers will meet these and many other similarly courageous women and girls who risked their lives to help defeat the Nazis.

Twenty-six engaging and suspense-filled stories unfold from across Germany, Poland, the Netherlands, France, Belgium, Denmark, Great Britain, and the United States, providing an inspiring reminder of women and girls’ refusal to sit on the sidelines around the world and throughout history.

An overview of World War II and summaries of each country’s entrance and involvement in the war provide a framework for better understanding each woman’s unique circumstances, and resources for further learning follow each profile. Women Heroes of World War II is an invaluable addition to any student’s or history buff’s bookshelf.

Kathryn J. Atwood is an educator and writer who has contributed to PopMatters.com; War, Literature, and the Arts; Midwest Book Review; and Women’s Independent Press.

“Inspiring accounts of the lives of women—some of them still in their teens—whose courage made a difference in the dark days of World War II.”  —Rita Kramer, author of Flames in the Field: The Story of Four SOE Agents in Occupied France

“Each story has been meticulously researched. . . . This is a great read for students who like adventure or are researching World War II.”  —VOYA, Voices of Youth Advocate reviews

“These stories will restore your faith in the human spirit and encourage us all to remember to do what is right. . . . [A] must read for anyone who has ever asked themselves: ‘What can I do? Can one person really make a difference?’”  —Kenneth Koskodan, author of No Greater Ally: The Untold Story of Poland’s Forces in World War II

“Adds a vital dimension to more traditional titles on the war. It will appeal to browsers seeking adventure tales while also enriching classes in history and women’s studies, and units on war and peace...Recommended”  —Library Media Connection

“Atwood’s admiration and enthusiasm for her subjects is apparent in these engaging profiles, and readers will likely be inspired to investigate these fascinating women further.”  —Kirkus Reviews