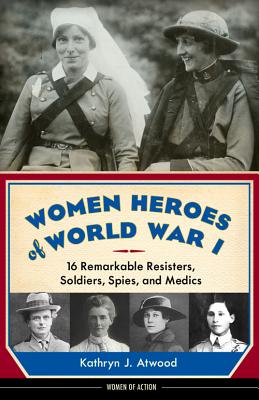 In time for the 2014 centennial of the start of the Great War, this book brings to life the brave and often surprising exploits of 16 fascinating women from around the world who served their countries at a time when most of them didn’t even have the right to vote. Readers meet 17-year-old Frenchwoman Emilienne Moreau, who assisted the Allies as a guide and set up a first-aid post in her home to attend to the wounded; Russian peasant Maria Bochkareva, who joined the Imperial Russian Army by securing the personal permission of Tsar Nicholas II, was twice wounded in battle and decorated for bravery, and created and led the all-women combat unit the “Women’s Battalion of Death” on the eastern front; and American journalist Madeleine Zabriskie Doty, who risked her life to travel twice to Germany during the war in order to report back the truth, whatever the cost. These and other suspense-filled stories of brave girls and women are told through the use of engaging narrative, dialogue, direct quotes, and document and diary excerpts to lend authenticity and immediacy. Introductory material opens each section to provide solid historical context, and each profile includes informative sidebars and “Learn More” lists of relevant books and websites, making this a fabulous resource for students, teachers, parents, libraries, and homeschoolers.

Kathryn J. Atwood is the author of Women Heroes of World War II and the editor of Code Name Pauline: Memoirs of a World War II Special Agent. She has contributed to War, Literature, and the Arts; PopMatters.com; and Women’s Independent Press. She lives near Chicago.

"A fine survey of major events in WWI and a case study in the types of social changes that often occur because of war, this book is an ideal candidate for both research and recreational reading." —Booklist

"The fast-paced narratives recounts the suspense-filled stories of these exceptional women." —The Nonfiction Detectives

"Women Heroes of World War I is a good introduction to the war that started 100 years ago for readers of any age. It is also a helpful addition to the literature of women's studies. Look for it to be popular in school and public libraries." —RickLibrarian.com

"In sharing these stories, Atwood has done the women featured a great service—letting their lessons in courage live on a century later. She also has done her reader a great service—reminding them that nothing, and particularly not gender, need stand in the way of courage." —Chicago Review of Books

"In short, Atwood’s book is a reflection of the triumph of the human spirit over adversity, and deserves its place on the bookshelf of anyone who is truly interested in the history not only of World War I, but also of womankind itself." —Bookpleasures.com

“No word, picture, or sidebar is wasted in this collection of elegant, accessible biographies, which together form a coherent history of a too-long neglected window on World War I.” —Elizabeth Wein, award-winning author of Code Name Verity

“Moving, surprising, and highly readable, these portraits shine a light on 16 brave and determined women whose contributions to the First World War deserve to be celebrated.”  —Duncan Barrett, bestselling author of The Sugar Girls

“Alongside their sisters toiling on the home front were women who served with exceptional valor at the front: from innovative medics to hard-bitten soldiers, from spies to enterprising journalists. Kathryn Atwood’s fascinating survey helps reset our perceptions of women in the Great War” —Peter Doyle, author of The First World War in 100 Objects

“Atwood captures a range of wartime experiences across multiple countries in this excellent volume.” —Tammy M. Proctor, author of Female Intelligence: Women and Espionage in the First World War