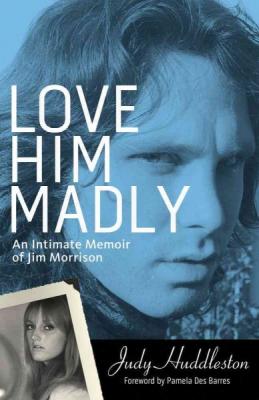 An Intimate Memoir of Jim Morrison

It was 1967. Judy Huddleston’s parents had just gotten divorced, and she spent her last year of high school attending Doors concerts. Transformed from a perceptive child into a rebellious teenager bent on attracting boys and fueled by psychedelics, she had lost her sense of self.

Then Jim Morrison came into her life.

Love Him Madly chronicles Judy’s four-year relationship with the singer. Honest and funny, written in the idealistic but jaded voice of a teenager, this intensely intimate memoir is a cautionary tale about sex, codependence, and misplaced spirituality. It also provides a direct and unprecedented view of a late-1960s Los Angeles subculture, an emotional portrayal of a sexual relationship with a man whose demons haunted everyone he knew, and a vivid portrait of Jim Morrison as a complex human being. A balanced portrait of an unbalanced relationship, Love Him Madly is an intense, moving, and poetic journey through one teenage girl’s unforgettable fall from innocence.

Judy Huddleston teaches writing and integrated arts at California State University–Monterey Bay. She is the author of This Is the End, My Only Friend and has been published in many literary journals, including NANO Fiction, New South, the Los Angeles Review, and Wordriot.

Praise For Love Him Madly: An Intimate Memoir of Jim Morrison…

“Judy Huddleston’s dreamy, provocative memoir is about the emptiness and desperation so many of us feel when we’re young. It’s about that universal desire for meaning, for the world to be more whole and colorful than it ever manages to be, and how Huddleston wrapped all that desire and hope into this one, equally troubled and desperate man: Jim Morrison.” —Kerry Cohen, author of Loose Girl: A Memoir of Promiscuity

“Jim Morrison’s life is well documented, but Love Him Madly delves into the profound personal cost of standing too close to such an incandescent and unpredictable flame. . . . Huddleston’s urgent and compelling prose plunge the reader inside the maelstrom of late-1960s L.A. and that beautiful, self-destructive genius.” —Sue William Silverman, author of Love Sick: One Woman’s Journey through Sexual Addiction

“Compelling reading. It was really difficult to put down this book as the story of fragile obsession unfolded.” —Pattie Boyd, author of Wonderful Tonight: George Harrison, Eric Clapton, and Me