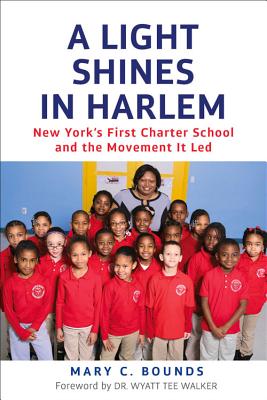 A Light Shines in Harlem

New York's First Charter School and the Movement It Led

A Light Shines in Harlem tells the fascinating story of the Sisulu-Walker Charter School of Harlem, the first charter school in New York, and of the charter movement. It is a penetrating look at the host of real-world decisions that make a charter school, or any school, succeed. And it is a true-to-life inspirational tale of how a hero of the civil rights movement, a Wall Street star, educators, inner-city activists, parents, and students all joined together to create a groundbreaking school that, in its best years, far outperformed other schools in the neighborhoods in which most of its children lived.

This book also looks at education reform through a broader lens. It discusses the most recent research and issues facing the charter movement, a movement which now educates more than 2.5 million students nationwide. A Light Shines in Harlem describes the strengths and weaknesses of charter schools and explains how lessons from them can be applied to other schools to make all schools better. The result is not only the gripping inside narrative of how one school fought to succeed despite the odds but also an illuminating glimpse into the future of American education.


Praise For A Light Shines in Harlem: New York's First Charter School and the Movement It Led…

“Each school has its own story, but few are chronicled as honestly, openly, and passionately as in this engaging volume. You will learn to love this school built with the same passion that inspired those who walked with Dr. Martin Luther King.” —Professor Paul E. Peterson, director of the Program on Education Policy and Governance at HarvardUniversity and author of Saving Schools: From Horace Mann to Virtual Learning

“A compelling, dynamic tale of how to create great schools. If you’re a parent or teacher who cares about educating our children, this is a book you cannot afford to miss.” —David A. Vise, Pulitzer Prize winner and author of The Bureau and the Mole and The Google Story

“A beautifully written and meticulously researched story about New York’s first charter school and the heroic folks who were responsible for creating this groundbreaking educational institution. It is a riveting story with a host of exceptional characters who turned a dream into a reality.” —Sy Fliegel, author of Miracle in East Harlem: The Fight for Choice in Public Education

“A must-read for anyone who cares about improving our educational system. Mary Bounds has researched and written an important story detailing the tenacious process required to establish charter schools in New York. It is a well-told narrative about launching a successful program that can enrich the education of every child in America.” —George E. Pataki, former governor of New York

“A Light Shines in Harlem tells the truly remarkable story behind New York City’s charter schools and the people who paved the way for lights to shine for more children. Read it and you’ll understand why charter schools were created and how they are the most important lever for social and economic equity this nation has ever seen.” —Jeanne Allen, Founder, Senior Fellow, and president emeritus of The Center for Education Reform

“A new, must-read book that tells the poignant, impactful story of Sisulu-Walker Charter School of Harlem, the first-ever charter school to open in New York.” —The Center for Education Reform Newswire

“A Light Shines in Harlem tracks the tenacity and heroism of a few of the reform movement's earliest and lesser known pioneers.” —The Huffington Post

“At its heart, A Light Shines is the story of an unlikely partnership between a Wall Street hotshot and a Harlem minister, the little-school-that-could they created together on 115th Street, and the path that they’ve charted for educational equity in New York—and across the nation.” —City Journal

"From this book one learns how difficult and complicated it is to open a charter school." —Nathan Glazer, professor emeritus of education and sociology at Harvard University, in his review for Education Next

“At its heart, A Light Shines is the story of an unlikely partnership between a Wall Street hotshot and a Harlem minister, the little-school-that-could they created together on 115th Street, and the path that they’ve charted for educational equity in New York—and across the nation.” —City Journal

Mary C. Bounds, an award-winning journalist, has written for the New York Times, the Chicago Tribune, the Houston Chronicle, and other publications. Dr. Wyatt Tee Walker was chief of staff for Dr. Martin Luther King Jr., Virginia state director of the Congress of Racial Equality, and executive director of the Southern Christian Leadership Conference; he helped organize the 1963 March on Washington. For 37 years he served as senior pastor at Harlem’s Canaan Baptist Church of Christ.
Loading...
or
Not Currently Available for Direct Purchase