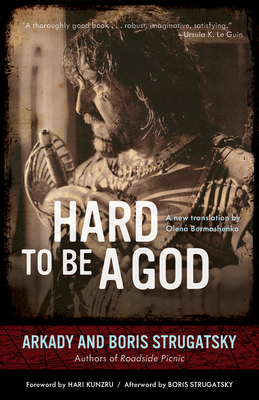 Hard to Be a God (Rediscovered Classics)

Arkady and Boris Strugatsky are widely known as the greatest Russian writers of science fiction, and their 1964 novel Hard to Be a God is considered one of the greatest of their works.

It tells the story of Don Rumata, who is sent from Earth to the medieval kingdom of Arkanar with instructions to observe and to influence, but never to directly interfere. Masquerading as an arrogant nobleman, a dueler and a brawler, Don Rumata is never defeated but can never kill. With his doubt and compassion, and his deep love for a local girl named Kira, Rumata wants to save the kingdom from the machinations of Don Reba, the First Minister to the king. But given his orders, what role can he play?

Hard to Be a God has inspired a computer role-playing game and two movies, including Aleksei German’s long-awaited swan song. Yet until now the only English version (out of print for over thirty years) was based on a German translation, and was full of errors, infelicities, and misunderstandings. This new edition—translated by Olena Bormashenko, whose translation of the authors’ Roadside Picnic has received widespread acclaim, and supplemented with a new foreword by Hari Kunzru and an afterword by Boris Strugatsky, both of which supply much-needed context—reintroduces one of the most profound Soviet-era novels to an eager audience.

Praise For Hard to Be a God (Rediscovered Classics)…

“One of the most skillfully written, heavily freighted science fiction novels I have ever read. . . . The writing is well paced and the narrative is beautifully structured.”  —Theodore Sturgeon

“This is a crisp, new translation of a highly influential 1964 Russian sf novel by the Strugatsky brothers… the story and themes will resonate as much with modern audiences as they did with readers in the mid-1960s.” —Library Journal

“This long-overdue translation will reintroduce one of the most profound Soviet-era novels to an eager audience.” —Literalab

“Hard to be a God is at once a plucky adventure novel and an anxious, sensitive vision of rising totalitarianism...sandwiched between an excellent introduction from novelist Hari Kunzru and an enlightening afterword from coauthor Boris Strugatsky, Hard to be a God is a worthwhile read, one that entertains even as it provokes.” —Weekly Alibi

“The stature of Hard to Be a God as the richest of their [the Strugatsky brothers’] novels—and one of the most popular Russian science-fiction novels—will surely be enhanced by Olena Bormashenko’s nuanced translation, far superior to that of its previous edition.” —World Literature Today

Arkady and Boris Strugatsky were famous and popular Russian writers of science fiction, with more than 25 novels and novellas to their names, including The Doomed City, The Inhabited Island, and Roadside Picnic. Hari Kunzru is the author of several highly praised novels, including Gods Without Men and The Impressionist. Olena Bormashenko is the critically acclaimed translator of the Strugatskys’ Roadside Picnic.