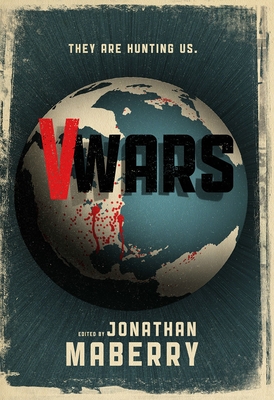 A sweeping, threaded narrative of the global phenomenon known as the Vampire Wars! Mankind is silently infected by a millennia-old bacteria unknowingly exhumed by a scientific expedition in Antarctica. Now, in some rare cases, a person's so-called "junk DNA" becomes activated, and depending on their racial and ethnic heritage they begin to manifest one of the many diverse forms of the "others" that are the true basis for the legends of supernatural creatures. These aren't your usual vampires and werewolves - it goes much deeper than that.

Conceived by Jonathan Maberry, V Wars features stories from various "frontlines" as reported by such contributors as Nancy Holder, Yvonne Navarro, James A. Moore, Gregory Frost, John Everson, Keith R.A. DeCandido, and Scott Nicholson (as well as Maberry himself). The result is a compelling series of tales that create a unique chronicle of mankind's response to this sudden, hidden threat to humanity.

"V-Wars is nothing short of stunning! The unique approach to vampire legends coupled with excellent storytelling skills by some very talented authors makes for a perfect blend." –Fresh Fiction For Today's Reader

JONATHAN MABERRY is a New York Times best-selling and multiple Bram Stoker Award-winning suspense author, editor, comic book writer, magazine feature writer, playwright, content creator and writing teacher/lecturer. He was named one of Today’s Top Ten Horror Writers. His books have been sold to more than two-dozen countries.
Among his numerous book and comic credits are the shared world anthologies V-Wars: Shockwaves and V-Wars: Night Terrors; the X-Files short story anthologies The Truth Is Out There, Trust No One, and Secret Agendas; the V-Wars comic series; and the comic series adaptation of his zombie novel Rot & Ruin; all from IDW Publishing.
Loading...
or
Not Currently Available for Direct Purchase