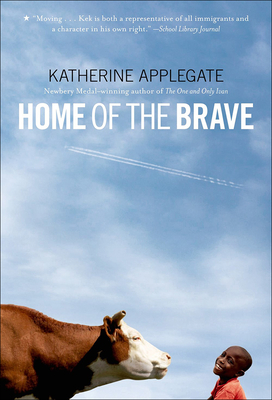 Home of the Brave

Kek comes from Africa where he lived with his mother, father, and brother. But only he and his mother have survived. Now she's missing, and Kek has been sent to a new home. In America, he sees snow for the first time, and feels its sting. He wonders if the people in this new place will be like the winter--cold and unkind. But slowly he makes friends: a girl in foster care, an old woman with a rundown farm, and a sweet, sad cow that reminds Kek of home. As he waits for word of his mother's fate, Kek weathers the tough Minnesota winter by finding warmth in his new friendships, strength in his memories, and belief in his new country.

Katherine Applegate is the author of several best-selling young adult series, including Animorphs and Roscoe Riley Rules. "Home of the Brave," her first standalone novel, received the SCBWI 2008 Golden Kite Award for Best Fiction and the Bank Street 2008 Josette Frank Award. "In Kek's story, I hope readers will see the neighbor child with a strange accent, the new kid in class from some faraway land, the child in odd clothes who doesn't belong," she says. "I hope they will see themselves." She lives with her family in Irvine, California.
Loading...
or
Not Currently Available for Direct Purchase