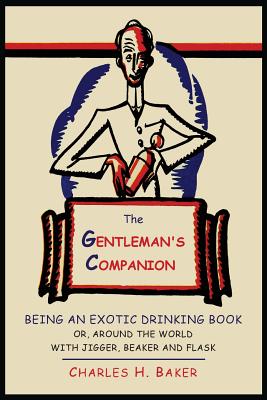 Being an Exotic Drinking Book Or, Around the World with Jigger, Beaker and Flask

2013 Reprint of 1939 Edition. Exact facsimile of the original edition, not reproduced with Optical Recognition Software. Charles H. Baker, Jr., wrote five collections of recipes that are far more than cookbooks, and impossible to classify. Baker states his chief tenet that informs his work: that all really interesting people-sportsman, explorers, musicians, scientists, vagabonds and writers-were vitally interested in good things to eat and drink; cared for exotic and intriguing ways of composing them. We soon discovered further that this keen interest was not solely through gluttony, the spur of hunger or merely to sustain life, but in a spirit of high adventure. Part travelogue, part memoir, and part instruction manual for budding bon vivants, his books and magazine columns chronicle a life spent searching for good things to eat and drink and the really interesting people with whom he loved to share them. Like his contemporaries Robert Ripley and Frank "Bring 'Em Back Alive" Buck, Baker traveled incessantly in search of unusual specimens; Baker brought his quarry home scribbled on the backs of bar napkins. In between overseas adventures, Baker fished with Hemingway off the Bimini coast; downed flaming apple brandy in the back room of a New Jersey inn with "Bill" Faulkner; joined Errol Flynn and Robert Frost for a beachfront dinner south of Miami, featuring four-inch steaks and potatoes boiled in pine resin-"better than any potato ever baked in mortal oven." "If you ever wondered whose oyster the world is," Esquire wrote in 1954, "meet Charles H. Baker, Jr." This book is an account of his discoveries regarding the world of exotic drink.