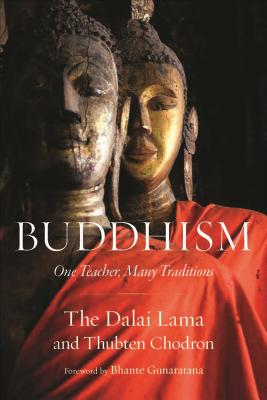 One Teacher, Many Traditions

Explore the common ground underlying the diverse expressions of the Buddha's teachings with two of Tibetan Buddhism's bestselling authors. Buddhism is practiced by hundreds of millions of people worldwide, from Tibetan caves to Tokyo temples to redwood retreats. To an outside viewer, it might be hard to see what they all have in common. In Buddhism, His Holiness the Dalai Lama and American Buddhist nun Thubten Chodron map out with clarity the convergences and the divergences between the two major strains of Buddhism--the Sanskrit traditions of Tibet and East Asia and the Pali traditions of Sri Lanka and Southeast Asia. Especially deep consideration is given to the foundational Indian traditions and their respective treatment of such central tenets as the four noble truths the practice of meditation the meaning of nirvana enlightenment.
The authors seek harmony and greater understanding among Buddhist traditions worldwide, illuminating the rich benefits of respectful dialogue and the many ways that Buddhists of all stripes share a common heritage and common goals.

The Dalai Lama is the spiritual leader of the Tibetan people. A beacon of inspiration for both Buddhists and non-Buddhists, he has persistently reached out across religious lines and to political leaders and scientists in dialogues advancing peace and understanding. For sixty years, he was the political leader of the Tibetan people, and in 1989 he was awarded the Nobel Peace Prize for his efforts to secure a peaceful resolution to the Chinese occupation of his homeland. Venerable Thubten Chodron, born 1950, has been a Buddhist nun since 1977. A native of Los Angeles and a graduate of UCLA, she is the founder and abbess of Sravasti Abbey in eastern Washington State. She is a popular speaker for her practical explanations of how to apply Buddhist teachings in daily life, and she is the author of several bestselling books, including Buddhism for Beginners. She lives in Newport, WA.
or support indie stores by buying on
Copyright © 2020 American Booksellers Association