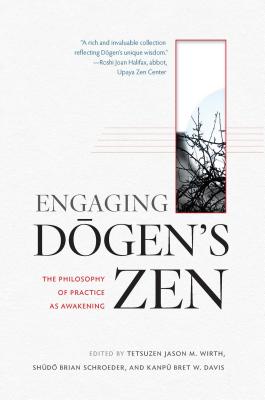 The Philosophy of Practice as Awakening

How are the teachings of a thirteenth-century master relevant today? Twenty contemporary writers unpack Dogen's words and show how we can still find meaning in his teachings.

Zen Master Dogen, the thirteenth-century founder of Japanese Soto Zen Buddhism, is widely regarded as one of the world’s most remarkable spiritual thinkers. Dogen influence on both Japanese and Western Zen Buddhism cannot be overstated. His writings, emphasizing the nonduality of practice and enlightenment are vastly subtle, endlessly sophisticated—and renownedly challenging to read on one’s own.

This unique collection of essays opens up for the reader new pathways for connecting to and making use of Dogen's powerful teachings. Some of Soto Zen’s leading scholars and practitioners offer a masterfully guided tour of Dogen’s writings, organized around two key texts: Shushogi, which is a classical distillation of the whole of Dogen’s teachings, and Fukanzazengi, Dogen universal instructions for Zen meditation. Along the way, the reader will gain an enriched understanding of the Zen practice and realization, of shikantaza or “just sitting,” and of the essence of Mahayana Buddhism—and a much deeper appreciation of this peerless master.

Praise For Engaging Dogen's Zen: The Philosophy of Practice as Awakening…

“Engaging Dogen's Zen is a wonderful collection of essays inquiring into the meaning of Dogen’s teaching and practice in the twentieth-first century, written by a number of sincere practitioner-scholars engaged in an examination of Shushogi and Fukanzazengi. I recommend this book to all Zen practitioners and all people who are interested in Buddhism and spirituality presently and in the future.”
— Shohaku Okumura, author of Realizing Genjokoan

“The right foot of mental clarity rests on the left thigh of continuous practice. The left foot of poised engagement rests on the right thigh of tradition. Even while “just sitting,” Dogen says we can walk the Way of the Buddhas. The remarkable essays in this volume, all personal expressions of thoughtful practice and compassionate engagement, collectively serve as a field guide to that Way, bringing philosophical insight, experience, and discipline to what Dogen called the “oneness of bodymind,” the true sense of feeling whole.”
— Thomas P. Kasulis, author of Intimacy or Integrity

Tetsuzen Jason M. Wirth is Professor of Philosophy at Seattle University, a Soto Zen priest, and founder and co-director of the Seattle University EcoSangha. His recent books include Commiserating with Devastated Things: Milan Kundera and the Entitlements of Thinking (Fordham 2015), Schelling’s Practice of the Wild (SUNY 2015), The Conspiracy of Life: Meditations on Schelling and His Time (SUNY 2003), a translation of the third draft of The Ages of the World (SUNY 2000), the edited volume Schelling Now (Indiana 2004), and the co-edited volume (with Kanpu Bret W. Davis and Shudo Brian Schroeder) Japanese and Continental Philosophy: Conversations with the Kyoto School (Indiana 2011). He is the associate editor and book review editor of the journal Comparative and Continental Philosophy. He is currently at work on a book titled Zen and Zarathustra. He lives in Seattle, WA.

Shudo Brian Schroeder is a priest in the Soto Zen lineage of Yashiki Chijo, abbot of Yokoji (Ishikawa Prefecture, Japan), and Professor of Philosophy and director of Religious Studies at the Rochester Institute of Technology (RIT). He has published numerous books and articles on Continental philosophy, Buddhist philosophy, the history of philosophy, environmental philosophy, and philosophical theology. He is director of the Idunno Zen Buddhist Community at RIT, a founding member of CoZen, and an active member of the Rochester Zen Center. He is also co-director of the Society for Phenomenology and Existential Philosophy and past co-director of the International Association for Enviromental Philosophy. He holds a Ph.D. in Philosophy from Stony Brook University and a M.Div. from the Princeton Theological Seminary. He lives in Rochester, NY.

Kanpu Bret W. Davis is Professor of Philosophy at Loyola University Maryland. His publications include several books and dozens of articles, written in English and in Japanese, on such topics as Heidegger, the Kyoto School, and Zen. He received a Ph.D. in philosophy from Vanderbilt University and spent thirteen years studying and teaching in Japan, during which time he studied Buddhist thought at Otani University, completed the doctoral program (with thesis in progress) in Japanese philosophy at Kyoto University, and undertook formal practice of Rinzai Zen as a member of Chishokai, a group of lay practitioners at Shokokuji (one of the main Zen training monasteries in Kyoto), whose members have included Kyoto School philosophers Nishitani Keiji and Ueda Shizuteru. Since 2005 he has served as leader of The Heart of Zen Meditation Group at Loyola University Maryland. In 2010 he received formal recognition as a teacher (sensei) and head of a Zen center (docho) from Kobayashi Gentoku Roshi, abbot of Shokokuji. He lives in Baltimore, MD.
Loading...
or support indie stores by buying on