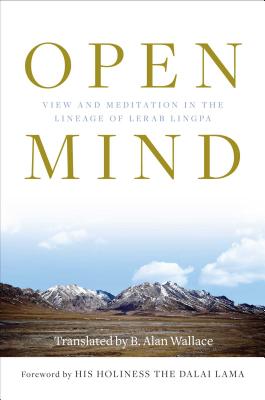 View and Meditation in the Lineage of Lerab Lingpa

Study the Great Perfection with the celebrated Lerab Lingpa, who imparted teachings to the Thirteenth Dalai Lama, and discover the common ground of Tibetan Buddhism’s many schools in essays by his disciples.

Lerab Lingpa (1856–1926), also known as Tertön Sogyal, was one of the great Dzogchen (Great Perfection) masters of the nineteenth and early-twentieth centuries and a close confidant and guru of the Thirteenth Dalai Lama. This volume contains translations by B. Alan Wallace of two works that are representative of the lineage of this great “treasure revealer,” or tertön.

The first work, composed by Lerab Lingpa himself, is The Vital Essence of Primordial Consciousness. It presents pith instructions on all the stages of the Great Perfection, which is the highest form of meditation and practice in the Nyingma school of Tibetan Buddhism. In this practice, the meditator comes to see directly the ultimate nature of consciousness itself. The work guides the reader from the common preliminaries through to the highest practices of the Great Perfection—the direct crossing over and the achievement of the rainbow body.

The second work, Selected Essays on Old and New Views of the Secret Mantrayana, is a collection of seven essays by two of Lerab Lingpa’s close disciples, Dharmasara and Jé Tsultrim Zangpo. Dharmasara wrote six of the essays, providing detailed, erudite explanations of the compatibility among the theories and practices of Great Perfection, Mahamudra (a parallel practice tradition found in other schools), and the Madhyamaka view, especially as these are interpreted by the Indian pandita Candrakirti, the Nyingma master Longchen Rabjam, and Tsongkhapa, founder of the Geluk school of Tibetan Buddhism. The one essay by Jé Tsultrim Zangpo (a.k.a. Tulku Tsullo), “An Ornament of the Enlightened View of Samantabhadra,” contextualizes the Great Perfection within the broader framework of Mahayana and Vajrayana Buddhism and then elucidates all the stages of practice of the Great Perfection, unifying the profound path of cutting through and the vast path of the spontaneous actualization of the direct crossing over.

This volume will be of great interest for all those interested in the theory and practice of the Great Perfection and the way it relates to the wisdom teachings of Tsongkhapa and others in the new translation schools of Tibetan Buddhism.

Praise For Open Mind: View and Meditation in the Lineage of Lerab Lingpa…

"Lerab Lingpa, Je Tsultrim Zangpo and Lozang Do-ngak Chokyi Gyatso all have the unusual ability to teach the profound wisdom of the Great Perfection out of their own experience, in a direct and meaningful way to dharma students living in our challenging times. It’s a tribute to Alan Wallace, a long-term practitioner, dharma teacher, and scholar, that he has translated these teachings (a very difficult task) into clear and sparkling prose that we can understand and use for practice."
— Tsoknyi Rinpoche, founder, Pundarika Foundation and author of Open Heart, Open Mind

“Tertön Sogyal is celebrated as one of the greatest Tibetan Buddhist teachers in the 20th century. This is a precious book that carries his profound wisdom. Thanks to Alan Wallace for doing such great job in translating it into English. Open Mind is a gift to those who have affinity with the way of Dzogchen.”
— Anam Thubten, author of The Magic of Awareness

B. Alan Wallace, a scholar and practitioner of Buddhism since 1970, has taught Buddhist theory and meditation worldwide since 1976. Having devoted fourteen years to training as a Tibetan Buddhist monk, ordained by the Dalai Lama, he went on to earn an undergraduate degree in physics and the philosophy of science at Amherst College and a doctorate in religious studies at Stanford. Today he is a frequent public speaker and retreat leader, and the founder of the Santa Barbara Institute for Consciousness Studies. He has edited, translated, authored, and contributed to many books, including Stilling the Mind and The Attention Revolution.
or support indie stores by buying on