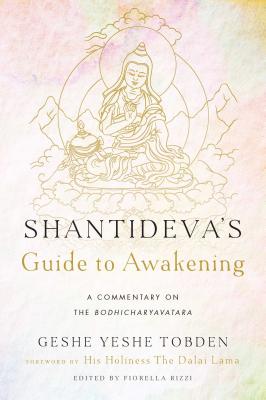 A Commentary on the Bodhicharyavatara

The most comprehensive modern commentary on Shantideva's master work. One of the great classics of Buddhist literature, the Bodhicharyavatara, or Way of the Bodhisattva, is required reading for understanding Tibetan Buddhism. Presented in the form of a personal meditation in verse, Shantideva, the seventh-century Buddhist master, outlines the path of the bodhisattvas--those who renounce the peace of their own liberation, vowing instead to attain enlightenment for the sake of all others. The Dalai Lama once remarked that his own understanding of the bodhisattva path is based entirely upon this text. Expounded by an accomplished scholar and deeply realized meditator, Shantideva's Guide to Awakening is a resource for a lifetime of study. Chapter by chapter and verse by verse, Geshe Yeshe Tobden maps the Bodhicharyavatara in clear and insightful language, helping us to deepen our understanding of its teachings and apply them to our lives.

Geshe Yeshe Tobden was born in 1926 to a family of wealthy farmers in Ngadra, a village one day's walk south of Lhasa, the capital of Tibet, and became a monk at age twelve. After the Chinese invasion of his homeland in 1959, he was arrested, but escaped, and spent two years crossing the Tibetan Plateau on foot until reaching the border with India. He completed his geshe studies in India, and spent several years teaching at the university in Varanasi. When he was forty-four, he told the Dalai Lama of his desire to live out his days in meditation retreat, for, from his boyhood, he had deeply desired the realization of reununciation, bodhichitta, and emptiness. Released from his duties at the university, he made his main residence a one-room hut above McLeod Ganj, the town in India where the Dalai Lama lives. There he lived for the remainder of his life, apart from a few teaching tours abroad, notably to fledgling Buddhist centers in Italy where these teachings were delivered. Geshe Yeshe Tobden passed away in McLeod Ganj in 1999. Fiorella Rizzi has been a student of Buddhism since 1980, when she met the late Geshe Yeshe Tobden. Since 1997, she has been translating and editing texts on Buddhist philosophy and practice and is the founder of the nonprofit cultural association La Ruota del Dharma. She lives in Pomaia, Italy.
or
Not Currently Available for Direct Purchase
Copyright © 2020 American Booksellers Association