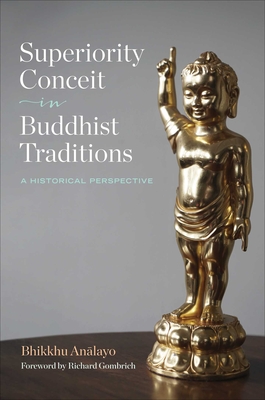 Renowned scholar-monk writes accessibly on some of the most contentious topics in Buddhism—guaranteed to ruffle some feathers.

Armed with his rigorous examination of the canonical records, respected scholar-monk Bhikkhu Analayo explores—and sharply criticizes—four examples of what he terms “superiority conceit” in Buddhism:


Ven. Analayo challenges the scriptural basis for these conceits and points out that adhering to such notions of superiority is not, after all, conducive to practice. “It is by diminishing ego, letting go of arrogance, and abandoning conceit that one becomes a better Buddhist,” he reminds us, “no matter what tradition one may follow.”

Thoroughly researched, Superiority Conceit in Buddhist Traditions provides an accessible approach to these conceits as academic subjects. Readers will find it not only challenges their own intellectual understandings but also improves their personal practice.

Praise For Superiority Conceit in Buddhist Traditions: A Historical Perspective…

“This book is a courageous call for integrity and self-reflection. Bhikkhu Analayo argues that if Buddhism is to engage the modern world with any enduring success, it must abandon its own conceit and reckon with its internal prejudices. This book is a much-needed contribution that will help reshape the direction of the field.”
— Vanessa Sasson, professor, Marianopolis College

“Scholars within the academic discipline of Buddhist studies have long benefited from Bhikkhu Analayo’s many careful and excellent studies of early Buddhist thought, based on a comparative reading of the available sources. Now, he makes the results of his many years of research available in an accessible and highly personal form: an impassioned plea to his fellow Buddhists to recognize their conceit—that is, their feelings of superiority over their fellow Buddhists—and its utter inconsistency with the core teachings of the Buddhist tradition. This slim volume will provide much food for thought for scholars and Buddhist practitioners alike. Highly recommended.”
— Reiko Ohnuma, professor and chair, Department of Religion, Dartmouth College

"Intellectually sharp and deeply penetrating, Bhikkhu Analayo unveils different manifestations of conceit in the name of Buddhism. Drawing from his extensive and detailed research on a manifold of topics of the early Buddhist traditions, Analayo deconstructs and unmasks what has often been taken as a matter of course by the heirs of the Buddha: that women are not entitled to take the same role as men in the Buddhist community, that the followers of the ‘Great Vehicle’ have a morally higher standing than those of the old schools, that the Pali tradition of the southern Buddhists is the only true guardian of the Buddhist tradition, and that the new and secular forms of Buddhism in the West are the peak of perfection of 2,500 years of Buddhist history. Analayo poignantly shows how conceit is present in Buddhist practices and practitioners and how it hinders the realization of a truly Buddhist vision in the world. It is this powerful critique from inside the Buddhist community, based on accurate analyses along historical and philological lines, that makes Bhikkhu Analayo’s book so powerful and evocative."

Bhikkhu Analayo is a bhikkhu (Buddhist monk), scholar, and meditation teacher. He was born in Germany in 1962 and went forth in 1995 in Sri Lanka. He is best known for his comparative studies of early Buddhist texts as preserved by the various early Buddhist traditions. He’s the author of Rebirth in Early Buddhism and Current Research.
Loading...
or support indie stores by buying on