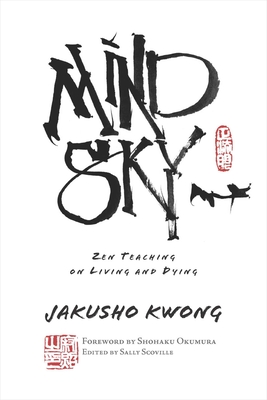 Zen Teaching on Living and Dying

A collection of talks, photos, and calligraphy by Jakusho Kwong-roshi, exploring the profound beauty of Zen history and practice, nature, and the philosophy of the ancient Zen master Eihei Dogen.

“In Zen meditation, anything that comes in your mind will eventually leave, because nothing is permanent. A thought is like a cloud moving across the blue sky. Nothing can disturb that all-encompassing vastness. This is the Dharma".

In a collection of talks and anecdotes, Jakusho Kwong-roshi, a Dharma successor of Shunryu Suzuki-roshi, presents his approach to Buddhist teaching. Containing photos of Kwong-roshi with his teachers, as well as a selection of his vibrant calligraphy, Mind Sky explores the profound beauty of Zen history and practice, nature, and the philosophy of the ancient Zen master Eihei Dogen.

With an elegant simplicity, Jakusho Kwong-roshi shows how Zen is experiential rather than intellectual. And with persistent practice, realization is already yours.


Praise For Mind Sky: Zen Teaching on Living and Dying…

“This is a wise and beautiful book of heart teachings by a great Soto Zen teacher, Jakusho Kwong-roshi, who shows the way to open infinite Dharma doors through Zen practice.”
— —Roshi Joan Halifax, abbot, Upaya Zen Center, author of Standing at the Edge and Being with Dying

“How wonderful that in these pages Jakusho Kwong-roshi shares the wisdom of a lifetime dedicated to Zen practice! This is a Dharma feast for us all to partake of. It seems that the essential Soto Zen practice is analogous to aspects of Mahamudra, pointing to the similarity in the Buddhist approach to understanding the mind. We welcome this clear instruction lighting the way to direct realization of the nature of the mind.”
— —Ven. Tenzin Palmo, author of Into the Heart of Life and Reflections on a Mountain Lake

“Mind Sky is Jakusho Kwong-roshi at his best! As ever, his teaching is direct and straightforward, full of compassion, wisdom, and gentle humor. He teaches that Zen practice encompasses samadhi and vipassana, but that Zen meditation goes beyond, to a state of ‘silent illumination’—shikantaza—just sitting. He emphasizes that realization can come through one’s own experience, not only on the meditation cushion but in normal day-to-day life. Kwong-roshi’s unique calligraphy in Mind Sky expresses a state of mind as vast and clear as the unclouded sky. Congratulations on this new book!”
— —Dhammananda Bhikkhuni (Chatsumarn Kabilsingh), abbess, Songdhammakalyani Monastery

“In Mind Sky, Jakusho Kwong-roshi points at practice and realization in our everyday life and compassionately encourages us in our practice. Mind Sky invites us to become deeply intimate with our life and, in the process, embody the profound teachings from our ancient predecessors.”
— —Chade-Meng Tan, author of Search Inside Yourself and Joy on Demand

“Kwong-roshi has been a true friend to my family and to students of Chögyam Trungpa Rinpoche for many years. That he is a deeply realized teacher is evident in his new book, Mind Sky. He joins practical instruction in sitting meditation with his profound but effortless understanding of the nature of things as they are. He shows us how to live and practice always in the present moment. I know that countless readers will benefit from this new volume, based on his teachings at Sonoma Mountain Zen Center.”
— —Druk Sakyong Wangmo (Lady Diana J. Mukpo), author of Dragon Thunder: My Life with Chögyam Trungpa

Jakusho Kwong was born in Santa Rosa, California, in 1935, and grew up in Palo Alto. As a boy he worked all summers with his mother in commercial flower growers’ fields nearby. During and after his education he was employed in commercial art as a sign painter, and was drawn to calligraphy, particularly zenga, the art of Zen calligraphy.

In 1960 he began to study Zen with Shunryu Suzuki-roshi in San Francisco. He was ordained in 1970 by Suzuki-roshi, who was a direct spiritual descendant of Eihei Dogen. In 1973, two years after Suzuki-roshi died, he founded Sonoma Mountain Zen Center in the mountains near Santa Rosa, California, as an expression of gratitude to his teacher and his commitment to continue the unbroken lineage of Soto Zen. Since his study of the transmission ceremony could not be completed before Suzuki-roshi’s death, he continued for five more years with Kobun Chino Otogawa-roshi. In 1978 he completed Dharma transmission through Hoitsu Suzuki-roshi under the supervision of Hakusan Noiri-roshi, at Rinso-in Temple in Japan, authorizing him as successor in Suzuki-roshi’s lineage.

In 2009, he was appointed Kokusaifukyoshi (International Zen Teacher) of North America by the Soto School of Japan, which recognizes Sonoma Mountain Zen Center as an authentic Soto Zen temple.

Jakusho Kwong has taught Zen for nearly fifty years, and founded Zen centers in Poland and Iceland. His first book, No Beginning, No End, was published in 2003.

He is abbot of Sonoma Mountain Zen Center, where he lives with his wife, Shinko.

Shohaku Okumura is a Soto Zen priest and Dharma successor of Kosho Uchiyama Roshi. He is a graduate of Komazawa University and has practiced in Japan at Antaiji, Zuioji, and the Kyoto Soto Zen Center, and in Massachusetts at the Pioneer Valley Zendo. He is the former director of the Soto Zen Buddhism International Center in San Francisco. His previously published books of translation include Shobogenzo Zuimonki, Dogen Zen, Zen Teachings of Homeless Kodo, and Opening the Hand of Thought. Okumura is also editor of Dogen Zen and Its Relevance for Our Time and SotoZen. He is the founding teacher of the Sanshin Zen Community, based in Bloomington, Indiana, where he lives with his family.
Loading...
or support indie stores by buying on