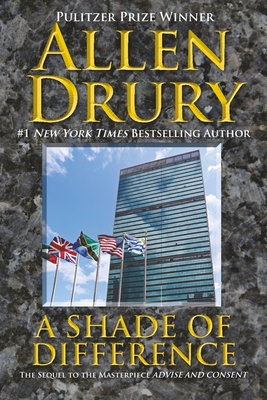 A Shade of Difference

The sequel to the Pulitzer Prize winning bestseller Advise and Consent.

From Allen Drury, the 20th Century grand master of political fiction, a novel of the United Nations and the racial friction that could spark a worldwide powderkeg.

International tensions rise as ambassadors and politicians scheme, using the independence of a small African nation as the focal point for hidden agendas. A cascade of events begun in the General Assembly Hall of the United Nations could lead to the weakening of the United States, the loss of the Panama Canal, and a possible civil war. Allen Drury paints a vivid and laser-accurate portrait of Washington and international politics, from top secret conferences, to elite cocktail parties, club luncheon rooms, and the private offices of the key players in government.

A novel as relevant today as when it was first published.

Allen Drury is a master of political fiction, #1 New York Times bestseller and Pulitzer Prize winner, best known for the landmark novel ADVISE AND CONSENT. A 1939 graduate of Stanford University, Allen Drury wrote for and became editor of two local California newspapers. While visiting Washington, DC, in 1943 he was hired by the United Press (UPI) and covered the Senate during the latter half of World War II. After the war he wrote for other prominent publications before joining the New York Times' Washington Bureau, where he worked through most of the 1950s. After the success of ADVISE AND CONSENT, he left journalism to write full time. He published twenty novels and five works of non-fiction, many of them best sellers. WordFire Press will be reissuing the majority of his works.
Loading...
or support indie stores by buying on