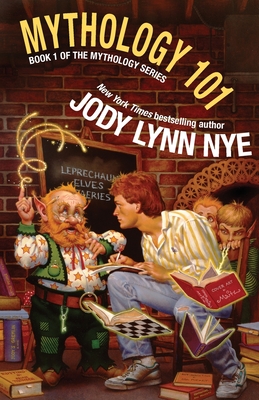 Jody Lynn Nye lists her main career activity as 'spoiling cats.' When not engaged upon this worthy occupation, she writes fantasy and science fiction books and short stories. Before breaking away from gainful employment to write full time, Jody worked as a file clerk, book-keeper at a small publishing house, freelance journalist and photographer, accounting assistant and costume maker. For four years, she was on the technical operations staff of a local Chicago television station, ending as Technical Operations Manager. Since 1987 she has published 45 books and more than 110 short stories. Although she is best known as a collaborator with other notable authors such as Anne McCaffrey (the Ship Who series, the Dinosaur Planet series), Robert Asprin (Dragons and the Myth-Adventures), John Ringo (Clan of the Claw) and Piers Anthony, Jody has numerous solo books to her credit, mostly fantasy and science fiction with a humorous bent. Her newest book is Fortunes of the Imperium (Baen Books), the second of the Lord Thomas Kinago books, which she describes as "Jeeves and Wooster in space." Over the last twenty-five years or so, Jody has taught in numerous writing workshops and speaks at schools and libraries, and teaches the two-day writers' workshop at DragonCon in Atlanta. When not writing, she enjoys baking, calligraphy, travel, photography and, of course, reading. Jody lives in the northwest suburbs of Chicago with her husband, Bill Fawcett, and Jeremy, their cat. jodylynnnye.com
or support indie stores by buying on
Copyright © 2020 American Booksellers Association