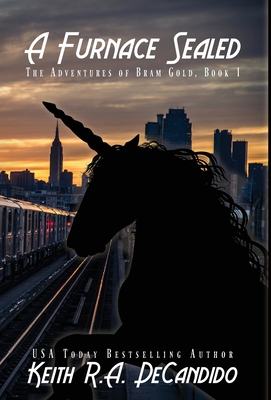 The Adventures of Bram Gold Book 1

Crazed unicorns, immortals, gods, vampires and werewolves turn up dead in the Bronx. Bram Gold, hunter for hire, investigates the events. Can he stop the destruction of New York?

Bram Gold is a Courser, a hunter-for-hire who deals with supernatural creatures, mystical happenings, and things that go booga-booga in the night.

Under the supervision of the Wardein-his childhood friend Miriam Zerelli, who is in charge of all magical activity in the Bronx, New York-he's who you hire if you need a crazed unicorn wrangled, some werewolves guarded while they gallivant around under the full moon, or an ill-advised attempt to bind a god stopped.

The Bronx is the home to several immortals, who are notoriously hard to kill-so it comes as rather a surprise when one of them turns up murdered, seemingly by a vampire. In addition, binding spells all across town are either coming undone, failing to work, or are difficult to restore.

As Bram investigates, more immortals turn up dead, and a strange woman keeps appearing long enough to give cryptic advice and then disappear. Soon, he uncovers a nasty sequence of events that could lead to the destruction of New York

The first in a new series of urban fantasy thrillers taking place in the Boogie-Down Bronx from best-selling, award-winning author Keith R.A. DeCandido.