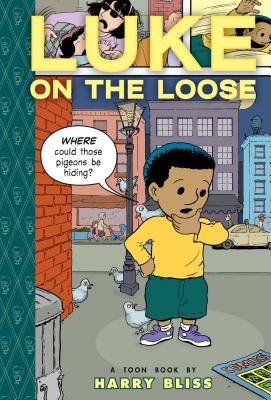 Luke on the Loose (Toon Books)

A first comic for brand-new readers Luke looks on at the pigeons in Central Park, while Dad is lost in "boring Daddy talk," and before you know it Luke is on the Loose He's free as a bird, on a hilarious solo flight through New York City. Illustrator Harry Bliss crafts a soaring story that will delight any young reader who has ever felt cooped up. Aligned to Common Core Standards and correlated to state standards. Beginning Readers is an imprint of Spotlight, a division of ABDO.

Harry Bliss is a beloved "New Yorker" cartoonist and cover artist as well as the illustrator of numerous bestselling children's books, including Doreen Cronin's "Diary of a Worm," and "Which Would You Rather Be?" by Caldecott Medal-winner William Steig. He is also the illustrator of "Louise, the Adventures of a Chicken" by Newbery Award-winner Kate DiCamillo. This is his first comic book.
Loading...
or
Not Currently Available for Direct Purchase