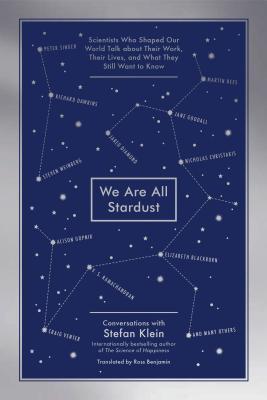 We Are All Stardust

Scientists Who Shaped Our World Talk about Their Work, Their Lives, and What They Still Want to Know

“What distinguishes scientists, in your eyes?”—Stefan Klein

When Stefan Klein, an acclaimed journalist, sits down to talk with 18 of the world’s leading scientists, he finds they’re driven by, above all, curiosity. When they talk about their work, they turn to what’s next, to what they still hope to discover. And they see inspiration everywhere: From the sports car that physicist Steven Weinberg says helped him on his quest for “the theory of everything” to the jazz musicians who gave psychologist Alison Gopnik new insight into raising children, they reveal how their paradigm-changing work entwines with their lives outside the lab. We hear from extraordinary natural and social scientists, including:


Praise For We Are All Stardust: Scientists Who Shaped Our World Talk about Their Work, Their Lives, and What They Still Want to Know…

“The dazzling clutch of scientific minds caught in mid-thought here makes for a read that provokes thought. . . .  Delights abound.”—Nature

“[Klein’s] interview subjects explain their science clearly and display their passions vividly, making this an engaging introduction to a great breadth of scientific topics.”—American Scientist

“An exceedingly welcome volume that will expose readers to all manner of topics that are likely new to them in a manner that focuses first on the lively personalities of the scientists, while slowly diving into their work. Surprises abound. . . and the book’s diversionary aspect can not be overrated. Truly enjoyable.”—Booklist

“Strongly recommended for biography readers and science enthusiasts who want to take a look at what events have shaped the lives of influential scientists, and how their scientific discoveries have changed the way they see the world.”—Universe Today

Stefan Klein, PhD, a trained physicist, is a longtime and internationally acclaimed science writer and journalist. His many books include the #1 international bestseller The Science of Happiness and have been translated into twenty-five languages.

Ross Benjamin is a translator of German literature and a writer. He has received the prestigious Helen and Kurt Wolff Translator’s Prize (2010) as well as a National Endowment for the Arts Translation Fellowship (2012).