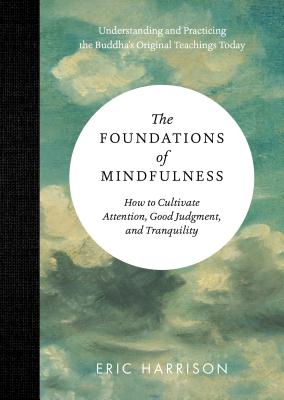 The Foundations of Mindfulness

How to Cultivate Attention, Good Judgment, and Tranquility

An Essential Addition to Mindfulness Literature

Who among us does not want to discern right from wrong and useful from useless in any situation?

Thirty years ago—long before the modern mindfulness movement—Eric Harrison began teaching meditation as a secular, science-based therapy. Paradoxically, he rooted his practice in the Buddha’s original teaching: the Satipatthana Sutta.

The 13 steps in the Sutta offer readers the full benefits of mindfulness: attention, good judgment, and tranquility. Now—informed by a lifetime spent teaching tens of thousands to meditate—Harrison offers both a new translation of the Sutta (the first in modern English) and lucid guidance on how to apply it today.


Praise For The Foundations of Mindfulness: How to Cultivate Attention, Good Judgment, and Tranquility…

“A deeply engaging book which both Buddhist meditators and secular mindfulness practitioners around the globe will find useful. To help clarify mindfulness, Eric Harrison explores the relationships, overlaps, and divergences between western Buddhist meditation and secular mindfulness. Whatever your particular views and preferences on the subject, TheFoundations of Mindfulness will help you locate them. I also enjoyed Eric's translation of the Satipatthana Sutta for its accessibility.”
—Sharon Salzberg, author of Lovingkindness and Real Happiness

“The Satipatthana Sutta is one of the Buddha’s foundational teachings on mindfulness. This commentary by a staunchly non-Buddhist mindfulness teacher makes for a stimulating and, at times, provocative read.”
—David Michie, author of The Dalai Lama’s Cat series and Mindfulness is Better Than Chocolate

Eric Harrison was born in Wellington, New Zealand, in 1949. He graduated from Victoria University with a BA in English literature and music, and started his working life as a schoolteacher and journalist. Between 1974 and 1985 he spent a total of 18 months doing retreats in the Burmese, Tibetan, Zen, and yoga traditions. While he appreciated the opportunities to do long retreats, he found he had no appetite for Buddhism itself.

When Eric opened the Perth Meditation Centre in 1987, he chose to use secular, rational, and science-based language to explain meditation. He later supplemented his knowledge with five years’ study in biology, cognitive science, and Western philosophy. This approach made his work acceptable to the many doctors and psychologists who referred clients to him, and to corporations that have employed him since. He has now taught 30,000 people how to meditate, and his previous six books, including Teach Yourself to Meditate and The 5-Minute Meditator, have been translated into 14 languages.