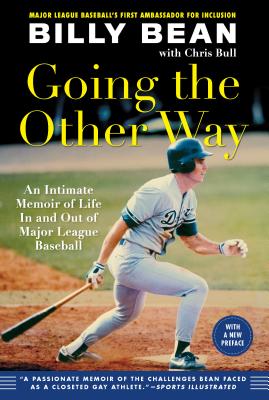 Going the Other Way

From major league baseball’s only openly gay former player—and now its first-ever Ambassador for Inclusion—the intimate chronicle of a man who, in the prime of his career, had to make a terrible choice between his love of the game and the love of his life

More than ten years after its original publication, Going the Other Way remains deeply moving, and more timely than ever.

By virtue of a relentless work ethic, exceptional multi-sport talent, and a quick left-handed swing, Billy Bean made it to the majors, where he played from 1987 to 1995—an outfielder for the Detroit Tigers, Los Angeles Dodgers, and San Diego Padres. But as a gay man in the brutally anti-gay world of baseball, closeted to teammates and family, Bean found himself unable to reconcile two worlds that he felt to be mutually exclusive. At the young age of 31, in the prime of his career, even as he solidified his role as a major-league utility player, Bean walked away from the game that was both his calling and his livelihood.

At once heartbreaking and farcical, ruminative and uncensored, this unprecedented memoir points the way toward a more perfect game, one in which all players can pursue their athletic dreams free of prejudice and discrimination.

Praise For Going the Other Way: An Intimate Memoir of Life In and Out of Major League Baseball…

“A passionate memoir of the challenges Bean faced as a closeted gay athlete.”—Sports Illustrated

“The courage Bean shows in telling his story is incredible.”—Los Angeles Times

“A fresh and insightful book. . . . Bean excels at capturing the rhythms of the game. . . . In telling his story, Bean has lent a hand of support to other ballplayers who might now be facing the same decision.”—San Francisco Chronicle

“A surprisingly honest account from a professional athlete . . . . This is a very good book to get a glimpse at what an athlete endures to play the game.”—Gregg’s Baseball Bookcase blog

“This gut-wrenching story is an amazing triumph of character over circumstances. Billy Bean is an inspiration.”
—Brad Ausmus, manager of the Detroit Tigers and former MLB all-star catcher

“A story [told] with oral immediacy and winning personality. Sports claimed [Bean] long before homosexuality did, and his love of baseball gives the book its powerful charm.”
—Booklist

“Reads more like an Everyman tale than a manifesto, and is more effective for it.”
—New York Daily News

“[Bean] tells a remarkable story of his unremarkable career—a paltry .227 average in the majors—and his wrenching struggle with his sexuality. . . . Bean’s candor, self-effacing humor, and brutal honesty will win him . . . new [fans].”
—Entertainment Weekly

“Fluently written and compulsively readable, Going the Other Way is at once a briskly paced account of life in baseball and the fiercely moving chronicle of a divided heart. It’s a major contribution to the literature of sport, straight or gay.”
—Richard Greenberg, author of the Tony Award–winning play Take Me Out

“It took a lot of courage for Billy Bean to play baseball in the major leagues—and even more to write about it—with insight and humor.”
—Peter Lefcourt, author of The Dreyfus Affair and Eleven Karens

In 2014 Billy Bean was appointed Major League Baseball’s first Ambassador for Inclusion, in which role he is at the fore of the League’s efforts for a fair and equitable workplace throughout all of baseball.

Chris Bull is cofounder of Gay Cities: Your Travel and City Guide and editorial director of Queerty.com, the most popular LGBT blog in the world.
Loading...
or
Not Currently Available for Direct Purchase