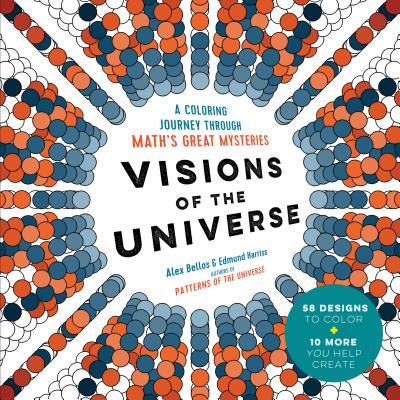 Visions of the Universe

Peek “behind the scenes” of the universe—and see math in brilliant color!

For curious minds throughout history, math was truly an art. In Visions of the Universe, you can pick up right where Isaac Newton, Blaise Pascal, and other luminaries left off—by coloring 58 exquisite patterns inspired by great discoveries in math:

Plus, in the Creating chapter, you’ll help complete 10 additional images by following simple steps that give spectacular results. No math knowledge is required: Anyone can be an artist in Numberland!


Praise For Visions of the Universe: A Coloring Journey Through Math’s Great Mysteries…

“Sure to be a hit for the math geek in your life.”—GeekDad.com

“This is by far the most entertaining math book I’ve seen in a long time. Want to show someone what math is about? Tell them to forget everything they’ve read. Then, hand them this book and a box of 100 crayons, and leave them alone for an hour. There’s no way you’ll get your copy back. Amazing!”
—Adrián Paenza, bestselling math author and winner of the International Congress of Mathematicians’ Leelavati Award

“My six-year-old and I are both loving the mathy new coloring book Visions of the Universe.”
—Jordan Ellenberg, PhD, author of How Not to Be Wrong

“Delightful, informative, and fun!”
—Steven Strogatz, author of The Joy of x

“I love this new math coloring book! I want the Menger slice as a Christmas ornament.”
—Manil Suri, UMBC professor of math and bestselling author of The Death of Vishnu

“Beautiful . . . Alex and Edmund have smuggled some of the best mathematical stories into this visual feast. By engaging the reader in their journey, the authors show how mathematics isn’t a spectator sport. Math comes alive when you make it yourself.”
—Marcus du Sautoy, Simonyi Professor for the Public Understanding of Science, University of Oxford

Alex Bellos holds a degree in mathematics and philosophy from Oxford University. His bestselling books, Here’s Looking at Euclid and The Grapes of Math, have been translated into more than 20 languages and were both shortlisted for the Royal Society Science Book prize. His puzzle books include Can You Solve My Problems?, Puzzle Ninja, Perilous Problems for Puzzle Lovers, and The Language Lover’s Puzzle Book. He is also the coauthor of the mathematical coloring books Patterns of the Universe and Visions of the Universe. He has launched an elliptical pool table, LOOP. He writes a puzzle blog for The Guardian, and he won the Association of British Science Writers award for best science blog in 2016. He lives in London.

Edmund Harriss is a mathematician, artist, and assistant professor at the University of Arkansas. He is the discoverer of the Harriss spiral and the creator of the construction toy Curvahedra. He is the coauthor of Hello Numbers, What Can You Do? and the coauthor and illustrator of two mathematical coloring books: Patterns of the Universe and Visions of the Universe. He lives in Fayetteville, Arkansas.
Loading...
or support indie stores by buying on