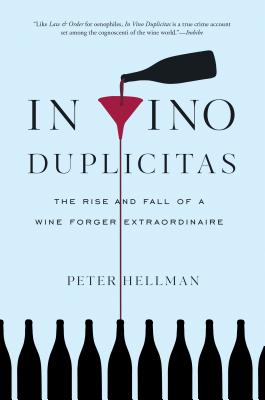 “[Hellman] presents . . . the macho, competitive, one-upmanship world of the collectors, an atmosphere that perhaps contributed to their gullibility in the high-rolling economy of the early 2000s.”—The New York Times

“In Vino Duplicitas is a cautionary tale of how we can let the romance of wine get the better of us. . . . None of us are immune.”—Washington Post

Few gain entry to the privileged world of ultrafine wines, where billionaires flock to exclusive auction houses to vie for the scarce surviving bottles from truly legendary years. But Rudy Kurniawan, an unknown twentysomething from Indonesia, was blessed with two gifts that opened doors: a virtuoso palate for wine tasting, and access to a seemingly limitless (if mysterious) supply of the world’s most coveted wines.

After bursting onto the scene in 2002, Kurniawan quickly became the leading purveyor of rare wines to the American elite. But in April 2008, his lots of Domaine Ponsot Clos Saint-Denis red burgundy—dating as far back as 1945—were abruptly pulled from auction. The problem? The winemaker was certain that this particular burgundy was first produced only in 1982.

Journalist Peter Hellman was there, and he would closely investigate as a singular cast of characters—including a Kansas-born billionaire and self-proclaimed “hoarder,” a dignified Burgundian winemaker, a wine-loving young prosecutor, and a crusty FBI agent who prepared for the case by reading French Wine for Dummies—worked to unravel the biggest con in wine history. Whether driven by the love of wine or of justice, all were asking the same question: Was the mild-mannered Kurniawan himself a dupe? Or had one young man—with little experience and few connections—ensnared the world’s top winemakers, sellers, and drinkers in a web of deceit?

“Peter Hellman led the way in reporting on Rudy Kurniawan’s monumental fraud, and he has written the book it deserves: tenaciously researched, propulsively told, and infused with earned wisdom about the wine world. I found it hard to put In Vino Duplicitas down and, like one of the authentically magical bottles the book describes, it will linger in your mind.”
—Benjamin Wallace, author of The Billionaire’s Vinegar

“A page-turning cautionary tale about the elite world of wine, and a gripping and disturbing read. You won’t be able to put it down.”
—Frances Dinkelspiel, author of Tangled Vines

“An exciting page-turner”
—George Taber, author of Judgment of Paris