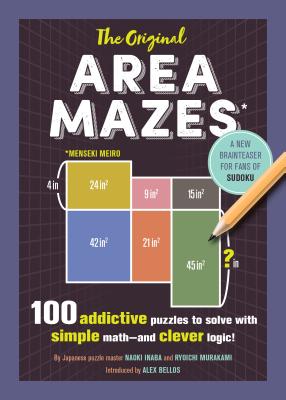 Once you match wits with area mazes, you’ll be hooked! Your quest is to navigate a network of rectangles to find a missing value.

Just Remember:
Originally invented for gifted students, area mazes (menseki meiro), have taken all of Japan by storm. Are you a sudoku fanatic? Do you play brain games to stay sharp? Did you love geometry . . . or would you like to finally show it who’s boss? Feed your brain some area mazes—they could be just what you’re craving!

“The 100 maze puzzles use nothing more than the area of a rectangle in their solutions and are broken into five levels of difficulty, making them useful for working with a diverse group of students with different mathematical backgrounds.”—The National Council of Teachers of Mathematics

“The only math you’ll need to know is that length times width equals area.”—FiveThirtyEight

Naoki Inaba has invented over 400 new types of puzzle. He also writes sudoku and other popular puzzles for magazines in Japan, where he has published several books of area mazes for children and adults.
Ryoichi Murakami is the founder and CEO of El Camino, a premier cram school in Tokyo. Many of his students go on to elite schools such as the University of Tokyo and compete in the International Mathematical Olympiad. In addition to teaching at El Camino, Murakami is active in publishing, works as a puzzle maker, and writes questions for the Olympiad.
Alex Bellos holds a degree in mathematics and philosophy from Oxford University. His bestselling books, Here’s Looking at Euclid and The Grapes of Math, have been translated into more than 20 languages and were both shortlisted for the Royal Society Science Book prize. His puzzle books include Can You Solve My Problems?, Puzzle Ninja, Perilous Problems for Puzzle Lovers, and The Language Lover’s Puzzle Book. He is also the coauthor of the mathematical coloring books Patterns of the Universe and Visions of the Universe. He has launched an elliptical pool table, LOOP. He writes a puzzle blog for The Guardian, and he won the Association of British Science Writers award for best science blog in 2016. He lives in London.