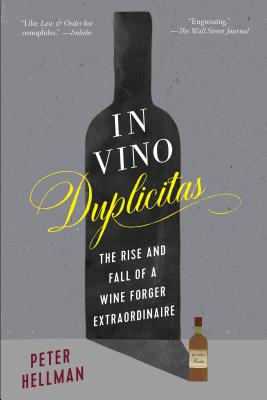 As seen on ABC’s The Con, the “engrossing” (Wall Street Journal) story of the biggest con in wine history

In 2002, Rudy Kurniawan, an unknown twentysomething, burst into the privileged world of ultrafine wines. Blessed with a virtuoso palate, and with a seemingly limitless supply of coveted bottles, Kurniawan quickly became the leading purveyor of rare wines to the American elite. But in April 2008, at a New York auction house, dozens of Kurniawan's trophy bottles were abruptly pulled from sale. Journalist Peter Hellman was there, and he began to investigate: Were the bottles fake? Were there others? And was Kurniawan himself a dupe . . . or had he ensnared the world's top winemakers, sellers, and drinkers in a web of deceit?

“Like Law Order for oenophiles, In Vino Duplicitas is a true crime account set among the cognoscenti of the wine world.”—Imbibe

“Peter Hellman led the way in reporting on Rudy Kurniawan’s monumental fraud, and he has written the book it deserves: tenaciously researched, propulsively told, and infused with earned wisdom about the wine world. I found it hard to put In Vino Duplicitas down and, like one of the authentically magical bottles the book describes, it will linger in your mind.”—Benjamin Wallace, author of The Billionaire’s Vinegar

“A page-turning cautionary tale about the elite world of wine, and a gripping and disturbing read. You won’t be able to put it down.”—Frances Dinkelspiel, author of Tangled Vines

“An exciting page-turner.”—George Taber, author of Judgment of Paris