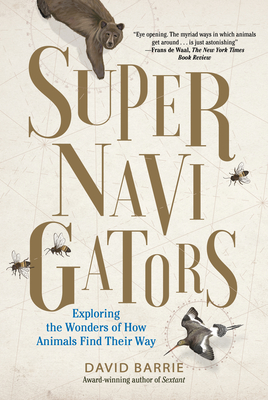 Animals plainly know where they’re going, but how they get there has remained surprisingly mysterious—until now.

In Supernavigators, award-winning author David Barrie catches us up on the cutting-edge science. Here are astounding animals of every stripe: Dung beetles that steer by the light of the Milky Way. Ants and bees that rely on patterns of light invisible to humans. Sea turtles and moths that find their way using Earth’s magnetic field. Humpback whales that swim thousands of miles while holding a rocksteady course. Birds that can locate their nests on a tiny island after crisscrossing an ocean.

The age of viewing animals as unthinking drones is over. As Supernavigators makes clear, a stunning array of species command senses and skills—and arguably, types of intelligence—beyond our own. Weaving together interviews with leading animal behaviorists and the groundbreaking discoveries of Nobel Prize–winning scientists, David Barrie reveals these wonders in a whole new light.

“Many . . . exceptional navigators . . . are humble and unsung, and learning about them is one of the pleasures of Supernavigators.”—The New Yorker

“Animal migration is all around us, as visible and as invisible as magnetism and gravity and as scientific, magical, and wondrous. David Barrie has done a superb job of elevating the invisible and shining light onto what most of us only glimpse from time to time. Like all migrations, this book itself is a homecoming of sorts.”—Carl Safina, author of Beyond Words and What Animals Think and Feel

David Barrie, a Fellow of the Royal Institute of Navigation, has sailed all over the world and made many long passages. After studying experimental psychology and philosophy at Oxford University, he served in the British Diplomatic Service, then worked in the arts and as a law-reform campaigner. His book Sextant was shortlisted for the Mountbatten Literary Award and won the Royal Institute of Navigation’s Certificate of Achievement. The great-great-nephew of J. M. Barrie, he is married with two daughters. Learn more at davidbarrieauthor.org.
Loading...
or
Not Currently Available for Direct Purchase