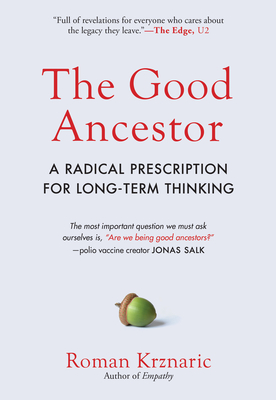 The most important question we must ask ourselves is, “Are we being good ancestors?”

So said Jonas Salk, who developed the polio vaccine in 1953 but refused to patent it—forgoing profit so that more lives could be saved.

Salk’s radical generosity to future generations should inspire us. But when leading philosopher Roman Krznaric examines society today, he sees just the opposite: Our short term, exploitative mindsets have “colonized the future.” Businesses eschew civic responsibility for immediate gains, politicians throw their support behind whatever will win the next election, and we all struggle to focus our attention beyond the next alert from our phones. The result? An inexcusable chasm between the haves and have-nots—and mounting existential threats—have brought our species to the precipice of disaster.

Yet Krznaric sees reason to hope. Yes, the urgent struggle for intergenerational justice calls for hugely ambitious solutions, from rewiring our growth-at-all-costs economy to giving voters of future generations a voice in our democracies. But at the heart of all these changes is one we can enact within ourselves: We must trade shortsightedness for long-term thinking.

In The Good Ancestor, Krznaric reveals six practical ways we can retrain our brains to think of the long view, including Deep-Time Humility (recognizing our lives as a cosmic eyeblink) and Cathedral Thinking (starting projects that will take more than one lifetime to complete). His aim is to inspire more “time rebels” like Greta Thunberg—to shift our allegiance from this generation to all humanity—in short, to save our planet and our future.

“Beautiful to read, heartfelt, and persuasive . . . one of those landmark books with the power to shift a mindset. One turns the pages feeling a growing compulsion for change.”—Isabella Tree, author of Wilding

“A philosopher’s contribution to saving the world.”—The Guardian

“Philosopher Roman Krznaric calmly calls for a reorientation toward the future, not to benefit us, but to benefit our far-off descendants. . . [The point is] to emphasize the agency of the present moment and the potential, however imperfect, to influence the future.”—The Atlantic

“A provocative and well-written . . . essay on the history of the human race and its possible future.”—Choice

“It is a cliché to declare a book essential reading, but in this case it is true. In a little more than 300 pages Krznaric develops a powerful set of concepts and a frame that will serve to refresh and undergird the civic rationale of public planning.”—Journal of the American Planning Association

Roman Krznaric is a public philosopher who writes about the power of ideas to change society. His books include Empathy, The Wonderbox, and Carpe Diem, and have been published in more than twenty languages. He studied at the Universities of Oxford, London, and Essex, where he received his PhD. He is a founding faculty member of The School of Life and is based in the UK.