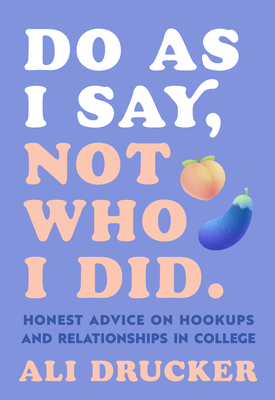 Honest Advice on Hookups and Relationships in College

Entering college marks an exciting—and often confusing—transition into adult independence, especially when it comes to navigating a healthy sex life and building fulfilling relationships. Do As I Say, Not Who I Did is a straightforward, judgment-free guide for young women, with practical advice backed by experts in the field of sexuality.

Ali Drucker lays bare her own hookup missteps and insecurities about sex in order to coach readers through the sticky situations that new independence presents. Plus, she weaves in the stories of over forty young women from colleges all over the country, with advice from sex therapists, OB-GYNs, and more. From consent, to STIs, to balancing relationships and schoolwork, she fills in the gaps that grade-school sex ed left wide open. Mixing candid memoir with current research, Do As I Say is the sex ed book teens and twentysomethings will actually want to read.

Ali Drucker has been writing about sexual health and relationships since 2014, when her first byline appeared in The New York Times. Since graduating from Skidmore College, she has written for publications including New York Magazine, Teen Vogue, Refinery 29, Salon.com, and ELLE.com. Drucker was senior sex & relationships editor for Maxim and then held the same role at Cosmo. She continues to write about issues ranging from the representation of sex in the media to mental health for publications including HuffPost, New York Magazine, and more. Drucker has served as an expert consultant for companies including USA Today and Bumble, and she’s been a guest speaker at creative writing courses at The New School and The Wing, instructing others on how to channel their relationships and experiences into impactful personal essays editors will want to buy. Although she didn’t “write the book” on sex, Drucker did edit the encyclopedia of sex; Cosmo’s Sexopedia is a massive online database of sex terms, all with shame-free definitions, pop culture examples, and helpful illustrations. For her work on the project, Drucker was named a finalist for a Hearst Editorial Excellence Award in 2017. Drucker currently lives in Los Angeles with her fiancé, comedy writer Jesse McLaren.
Loading...
or support indie stores by buying on