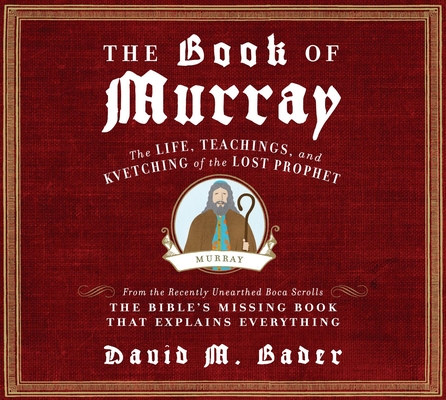 The Book of Murray

Meet the Prophet Murray, son of Irving of the Tribe of Levi (Relaxed Fit) and his wife, Francine. Though a poor student and a disappointment to his parents, Murray cannot escape his destiny. Hearing God’s call, he wanders the lands with his cousin Lenny, preaching his unique brand of biblical wisdom (“Love the stranger, though not on the first date”), dispensing diet tips, and giving unsolicited advice.

From the fertile mind of David M. Bader comes a loving and mirthful new take on the best biblical stories. We learn of Murray’s early years, the Healing of the Hypochondriac, the Virgin by the Well, the Writing on the Wall, the Ten (or So) Commandments, and the Dream of King Joe Bob. “In the modern world,” Bader writes, “the lives and teachings of biblical prophets often seem remote and dim in our consciousness. And of all these narratives, The Book of Murray may well be the dimmest.”

Praise For The Book of Murray: The Life, Teachings, and Kvetching of the Lost Prophet…

“Ridiculously funny. . . . Kimmelbarb’s interpretations of the author’s pacing and humor are spot-on. Bader’s witty laugh-along is for anyone in danger of taking things a bit too seriously.”
—AudioFile

DAVID M. BADER is a writer in New York City, a pursuit that raises the eternal question, “From this he makes a living?” He is the author of Haikus for Jews and Zen Judaism. He began work on this book after an image of the Prophet Murray appeared to him on a toasted bagel.

YASH KIMMELFARB’s first professional role was the turtle in the Barter Theatre’s production of Brer Rabbit. Since then it’s been a struggle. Yash lives in Brooklyn; where else?
Loading...
or support indie stores by buying on