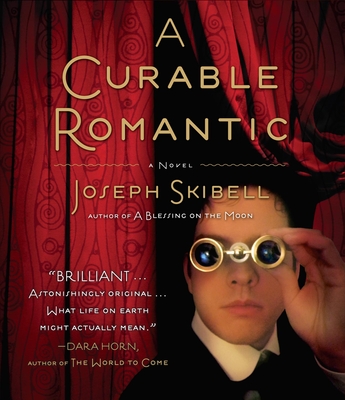 “Joseph Skibell is one of America's great unsung writers. His new novel, A Curable Romantic, is funny, dark, and profound. If there is justice in the world, it will win a major prize next year. Skibell writes amazing prose that carries you like a dream through a complicated plot without ever leaving you impatient. Fine literary tears will be cried.”
— Paul Ingram, Prairie Lights Books, Iowa City, IA
View the List

JEFF WOODMAN originated the title role in Tennessee Williams' "The Notebook of Trigorin" and won the san Francisco Critics' circle Award for his performance in "an Ideal Husband" In addition to numerous Off-Broadway credits, his TV appearances include Law & Order, Sex and the City, and Cosby. His more than 200 audiobook narrations has earned him numerous awards, including a People magazine "Annual Top Five" citation and a spot in AudioFile magazine's "Top Fifty Voices of the Century".

Praise For A Curable Romantic…

“Skibell’s delicious juxtaposition of Sammelsohn against the cocaine snorting Freud, and Sammelsohn’s infatuation with the ‘cruel, vindictive, haughty, caustic, dismissive, even murderous’ character of Emma Eckstein, one of Freud’s patients, make for a magnetic collection of personalities.”
—Publishers Weekly [starred review]

“Jeff Woodman is a chameleon. He vanishes into each character and milks every satiric ounce out of Skibell’s merry novel in one of the best audios of the year.”
—Publishers Weekly [starred review]

“This is a fascinating, ambitious, and very successful novel about Jewish folklore, the quest for spiritual truth, and the darkest days of the 20th century. As he did in A Blessing on the Moon, Skibell blends gritty realism with elements of fantasy and magical realism....It is to Skibell’s credit that this complex plot comes off as believable, engaging, and often inspiring.”
—Library Journal [starred review]