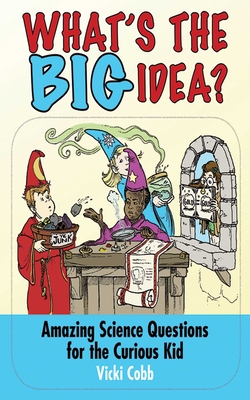 Why does a rolling ball stop rolling? Why doesn’t the sun burn out? Why can’t you unscramble an egg? Why can’t we live forever? These are all questions that a curious kid might ask. In What’s the BIG Idea?, renowned juvenile science educator Vicki Cobb answers these and thirty-one other fascinating questions to help kids learn more about the world through the wonders of science.

A big idea is one that has no simple or easy answer, and there are four big ideas in this book: motion, energy, matter, and life. The motion of nonliving objects—rolling balls, falling stones, the moon and stars—seems so ordinary and familiar that most people take it for granted. Matter, on the other hand, comes in so many different forms—solids, liquids, gases, metals, nonmetals, living material—it is hard to imagine anything that all matter has in common. Energy is an idea that is in the news just about every day, yet most people couldn’t tell you what the big idea of energy is. And life seems mind-boggling and infinitely complicated. How do we bend our brains around it?

Scientists learn by asking questions. And What’s the Big Idea? is designed to make young readers stop and think about each of the thirty-five questions before reading what scientists have learned that answers each question. They’ll be able to do simple things to see for themselves and build their own scientific knowledge in the process. By the time they’ve finished this book, they’ll have a pretty good idea of what science is all about.

Vicki Cobb is the well-known author of more than eighty-five highly entertaining nonfiction books for children, including Bet You Can’t, which won the New York Academy of Sciences Children’s Science Book Award. Currently, she is president and founder of INK Think Tank: Nonfiction Authors in Your Classroom. She has won numerous awards, including a Sibert Honor and a special Lifetime Achievement Prize from the American Association for the Advancement of for the Advancement of Science in 2012. She lives in Greenburgh, New York.
Loading...
or
Not Currently Available for Direct Purchase