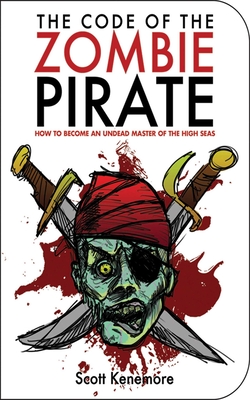 The Code of the Zombie Pirate (Paperback)

Set in the Caribbean of the eighteenth century, the epicenter of piracy, voodoo, and the dark arts, The Code of the Zombie Pirate reveals all the secrets to selecting, customizing, and managing a motley crew of pirates-cum-zombies. Imagine the consequences of pirates who have crossed the line to immortality: the breathtaking lack of respect for life—it’s the ultimate pirate dream! Kenemore advises captions in: This rollicking guide through the world that zombies and pirates both haunted and hunted will keep Zen of Zombie readers intrigued and win over legions of new fans.

Born in New York and educated at Kenyon College and Columbia University, Scott Kenemore is the nationally bestselling author of The Grand Hotel, Zombie, Ohio, and numerous other works of horror, fiction, and satire.  He lives in Evanston, Illinois.
or
Not Currently Available for Direct Purchase
Copyright © 2020 American Booksellers Association