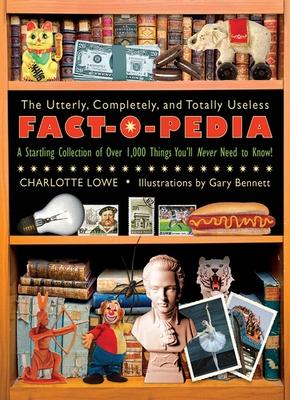 A Startling Collection of Over 1,000 Things You'll Never Need to Know

Did you know that cats were once used to deliver mail in Belgium? That the “huddle” in football became popular after a deaf player began using it to prevent other teams from reading his sign language? That the average American eats 30 pounds of cheese in a year? Organized from A to Z, there are over 1,000 trivia tidbits for you to peruse.

Start off with little-known facts about Aristotle and Barbie, and continue until you’ve discovered hidden gems about zombies, zippers, and more! Did you know that Levi Strauss originally intended to sell canvas tents to miners in California but ended up using the fabric to make what the prospectors really needed—pants? Or that a chicken in Colorado had its head cut off and managed to live for another two years? Did you know that if Americans were to switch just 10 percent of their total mileage to scooters, we would consume 14 million gallons less fuel and reduce CO2 emissions by 324 million pounds in just one day? Or that on May 15th, 1950, Coca-Cola became the first product ever to appear on the cover of Time magazine?