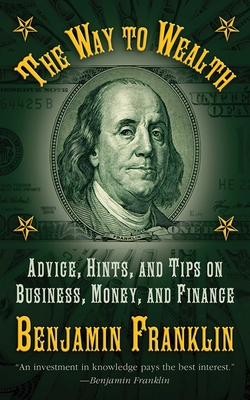 The Way to Wealth (Hardcover)

Advice, Hints, and Tips on Business, Money, and Finance

Ben Franklin’s writings have inspired millions throughout the years, and his advice on how to earn and save money is timeless. The Way to Wealth is a collection of Franklin’s essays and personal letters on how to make money, start a business, and save for the future. Essays include “Advice to a Young Tradesman,” which explains how to run a profitable business; “The Whistle,” a charming parable on how to prevent greed from trumping profitability; and “On Smuggling, and its Various Species,” which reveals the reasons cheaters never succeed. All will help and inspire you on your glorious way to wealth and prosperity.

Also included is Franklin’s “The Way to Make Money Plenty in Every Man’s Pocket,” tidbits from Poor Richard’s Almanack, personal letters to his sister chock-full of advice for a prosperous household, and more! In tough economic times, this book is for anyone who longs for financial stability and growth.

Benjamin Franklin was a writer, inventor, political theorist, diplomat, and Founding Father of the United States. He wrote under the pen name of Poor Richard from 1732 to 1757.
or
Not Currently Available for Direct Purchase
Copyright © 2020 American Booksellers Association