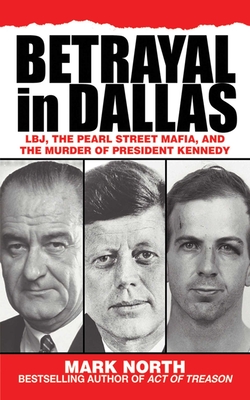 LBJ, the Pearl Street Mafia, and the Murder of President Kennedy

The incredible solution to the crime of the twentieth century!

Here's what we now know: John F. Kennedy was assassinated in Dallas by Mafia contract killers hired by Louisiana mob boss Carlos Marcello. Kennedy was killed in that city because it was the only place in the country where a crime of that magnitude could be committed without fear of punishment. Long-time local district attorney Henry Wade, an LBJ crony who would have sole jurisdiction over the prosecution of those responsible, had been corrupted by the local Civello crime family. Lyndon B. Johnson, while a U.S. senator during the 1950s, had accepted bribes from the same mobsters so that they could avoid deportation.

With incredible detail and documentation, Mark North pieces the puzzle together to reveal how in late 1961, U.S. Attorney General Robert Kennedy and his brother John, who hated LBJ, initiated a covert Organized Crime Task Force investigation of the Civello mob in Dallas. They understood that destroying the Dallas Mafia would also destroy LBJ. Johnson, through Wade and local federal officials he had placed in power, learned of the plan and cooperated with the Civello mob to have JFK killed. Johnson did this, in part, because he had the power to control any subsequent federal investigation via FBI director J. Edgar Hoover. Johnson had leverage over Hoover because he had learned that the director and his assistant Clyde Tolson were lovers. After the Mafia killed JFK, Johnson stopped Robert Kennedy's prosecution of the Dallas Mafia.

Betrayal in Dallas is unlike any book written on the JFK assassination. Because its conclusions are based on classified federal documents unknown to the public and research community, it will startle and convince all those who read it. It is inevitable that, at some point, any great historical truth becomes known.

Betrayal in Dallas is nothing less than the vehicle for that moment. It is what the American people have been waiting for since November 22, 1963.