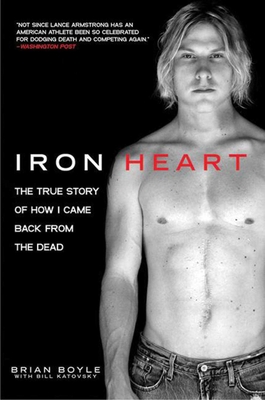 The True Story of How I Came Back from the Dead

On the way home from swim practice, eighteen-year-old athlete Brian Boyle’s future changed in an instant when a dump truck plowed into his Camaro. He was airlifted to a shock-trauma hospital. He had lost sixty percent of his blood, his heart had moved across his chest, and his organs and pelvis were pulverized. He was placed in a medically-induced coma. When Brian finally emerged from the coma two months later, he had no memory of the accident. He could see and hear, but not move or talk. Unable to communicate to his doctors, nurses, or frantic parents, he heard words like “vegetable” and “nursing home.” If he lived, doctors predicted he might not be able to walk again, and certainly not swim. Then, miraculously, Brian clawed his way back to the living. First blinking his eyelids, then squeezing a hand, then smiling, he gradually emerged from his locked-in state. The former swimmer and bodybuilder had lost one hundred pounds.
Iron Heart is the first-person account of his ordeal and his miraculous comeback. With enormous fortitude he learned to walk, then run, and eventually, to swim. With his dream of competing in the Ironman Triathlon spurring him on, Brian defied all odds, and three and a half years after his accident, crossed the finish line in Kona, Hawaii. Brian’s inspiring journey from coma to Kona is brought to life in his acclaimed memoir.

Brian Boyle survived a near fatal car accident in 2004 and then went on to participate in dozens of triathlons and endurance events throughout the world. His memoir, Iron Heart, chronicles his road to recovery and journey into the sport of triathlon. He lives in Maryland.
Loading...
or
Not Currently Available for Direct Purchase