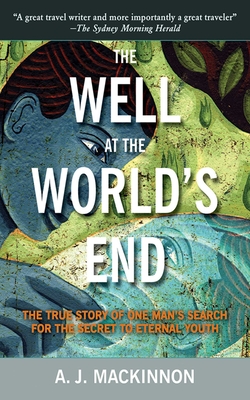 The Well at the World's End

When A. J. Mackinnon quits his job in Australia, he knows only that he longs to travel to the well at the world’s end, a mysterious pool on a remote Scottish island whose waters, legend has it, hold the secret to eternal youth. Determined not to fly—he claims it would feel as though he were cheating—he sets out with a backpack, some fireworks, and a map of the world and trusts that chance will take care of the rest.
Traveling by land and sea, train, truck, horse, and yacht, Mackinnon travels across the world, getting caught up in a series of hilarious, sometimes surreal, adventures. He survives a near-fatal bus crash in Australia, accidentally marries a Laotian princess, is attacked by a Komodo dragon, and does time in a sketchy Chinese jail, among many other mishaps and misadventures along the way. Each new continent and each new mode of transport brings the possibility of a near-miss or happy accident, all on the quest for eternal youth. This is the astonishing true story of a remarkable voyage.

A. J. Mackinnon was born in Australia in 1963. He is currently a teacher at the Timbertop campus of Geelong Grammar. His bestselling debut book, The Unlikely Voyage of Jack De Crow, described his journey through the waterways of Europe. He lives in High Country, Victoria, Australia.
Loading...
or
Not Currently Available for Direct Purchase