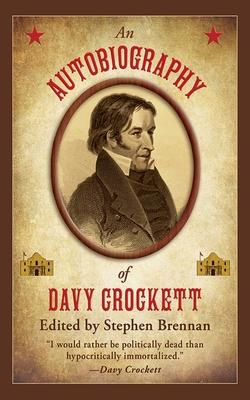 An Autobiography of Davy Crockett (Hardcover)

Based in part on Davy Crockett’s own writings, this is the true story about one of America’s most iconic historical figures. From his days as a scout for Andrew Jackson during the war of 1812, his time as a Congressman for the state of Tennessee, and his eventual death at the Alamo, Davy Crockett led a life that was admired and idealized by people all across America, to this very day. Read about the monopolist and corporate misdeeds, environmental degradation, and foreign military adventures that he experienced during his amazing life. Illustrated with drawings and photos, discover the rich history—part myth and part fact—behind this great American man.

Stephen Brennan is the author of The Adventurous Boy’s Handbook and The Adventurous Girl’s Handbook. He has also edited and arranged An Autobiography of Theodore Roosevelt and An Autobiography of General Custer, among others. He has worked as a circus clown, book editor, teacher, cabaret artist, actor, director, shepherd, and playwright. He resides in New York City and West Cornwall, Connecticut.
or
Not Currently Available for Direct Purchase
Copyright © 2020 American Booksellers Association