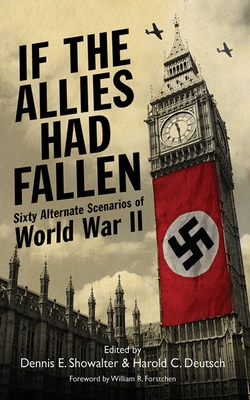 If the Allies Had Fallen

For fans of Man in the High Castle and other tales of alternative history, explosive, thought-provoking “what-if” stories about Pearl Harbor, D-Day, Hitler, the Battle of Britain, and more!

What if Stalin had signed with the West in 1939? What if the Allies had been defeated on D-Day? What if Hitler and the Nazis had won the war?

From the Munich crisis and the dropping of the first atom bomb to Hitler’s declaration of war on the United States and the D-Day landings, historians suggest “what might have been” if key events in World War II had gone differently.

Dennis E. Showalter is a professor of history at Colorado College who specializes in German military history. He is also the former president of the American Society for Military History. Showalter has previously taught at the United States Air Force Academy, the United States Military Academy, and the Marine Corps University. His recent publications include Patton and Rommel: Men of War in the Twentieth Century and Hitler’s Panzers: The Lightning Attacks that Revolutionized Warfare.

Harold C. Deutsch was a historian at the University of Minnesota, and was the author of The Conspiracy Against Hitler in the Twilight War and Hitler and His Generals: The Hidden Crisis, January-June 1938.

William R. Forstchen is the author of more than forty books, including the award-winning We Look Like Men of War. He is a professor of history and faculty fellow at Montreat College, in Montreat, North Carolina.
Loading...
or support indie stores by buying on