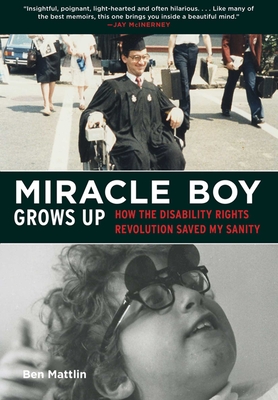 How the Disability Rights Revolution Saved My Sanity

Ben Mattlin lives a normal, independent life. Why is that interesting? Because Mattlin was born with spinal muscular atrophy, a congenital weakness from which he was expected to die in childhood. Not only did Mattlin live through childhood, he became one of the first students in a wheelchair to attend Harvard, from which he graduated and became a professional writer. His advantage? Mattlin’s life happened to parallel the growth of the disability rights movement, so that in many ways he did not feel that he was disadvantaged at all, merely different.
Miracle Boy Grows Up is a witty, unsentimental memoir that you won’t forget, told with engrossing intelligence and a unique perspective on living with a disability in the United States.

Ben Mattlin was born in New York in 1962 with spinal muscular atrophy, a congenital neuromuscular weakness. He graduated from Harvard in 1984 and became a freelance writer. He's a frequent contributor to Financial Advisor magazine. His essays have appeared in The New York Times, Los Angeles Times, Washington Post, Chicago Tribune, and USA Today, and been broadcast on NPR's "Morning Edition." He's also written for Self magazine and is a former contributing editor at Institutional Investor, the late Windows In Financial Services, Dealmaker, Buyside, and Individual Investor magazines. He lives in Los Angeles with his wife, two daughters, a cat, and a turtle.
Loading...
or
Not Currently Available for Direct Purchase