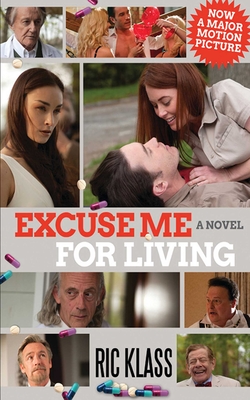 Excuse Me For Living (Paperback)

One of New York’s finest saves brilliant and debonair (but drug-addicted) Daniel Topler from his suicide attempt on the George Washington Bridge. In court, the judge entrusts the young man to the care of Dr. Jacob Bernstein, an elderly psychiatrist at an upscale rehab clinic. The doctor issues these commands: obey the no-drugs rules, and join the geriatric temple men’s group he leads—or face incarceration. Dan has no choice but to comply.
Dan’s prep school friends initially lure him back to the drugs, booze, and women. But all that changes when he meets Bernstein’s daughter, Laura, and the two must sneak around behind the doctor’s disapproving back. To finally rise above his past, Dan must come face to face with his decisions and the person he wants to become, as the story arrives at a surprising conclusion.

In his debut novel, Klass weaves together multiple storylines, highlighting the humorous and slightly odd details in life, all the while keeping his eye on the emotional core of the story. His book’s release coincides with the premiere of the major motion picture conceived in tandem with the novel, written, produced, and directed by the author and featuring a who’s who cast including Christopher Lloyd, Jerry Stiller, Robert Vaughn and Dick Cavett, among many others.
or
Not Currently Available for Direct Purchase
Copyright © 2020 American Booksellers Association