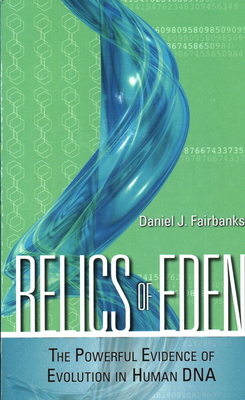 The Powerful Evidence of Evolution in Human DNA

Since the publication in 1859 of Darwin’s Origin of Species, debate over the theory of evolution has been continuous and often impassioned. In recent years, opponents of "Darwin’s dangerous idea" have mounted history’s most sophisticated and generously funded attack, claiming that evolution is "a theory in crisis." Ironically, these claims are being made at a time when the explosion of information from genome projects has revealed the most compelling and overwhelming evidence of evolution ever discovered. Much of the latest evidence of human evolution comes not from our genes, but from so-called "junk DNA," leftover relics of our evolutionary history that make up the vast majority of our DNA.
Relics of Eden explores this powerful DNA-based evidence of human evolution. The "relics" are the millions of functionally useless but scientifically informative remnants of our evolutionary ancestry trapped in the DNA of every person on the planet. For example, the analysis of the chimpanzee and Rhesus monkey genomes shows indisputable evidence of the human evolutionary relationship with other primates. Over 95 percent of our genome is identical with that of chimpanzees and we also have a good deal in common with other animal species.
Author Daniel J. Fairbanks also discusses what DNA analysis reveals about where humans originated. The diversity of DNA sequences repeatedly confirms the archeological evidence that humans originated in sub-Saharan Africa (the "Eden" of the title) and from there migrated through the Middle East and Asia to Europe, Australia, and the Americas. In conclusion, Fairbanks confronts the supposed dichotomy between evolution and religion, arguing that both science and religion are complementary ways to seek truth. He appeals to the vast majority of Americans who hold religious convictions not to be fooled by the pseudoscience of Creationists and Intelligent Design advocates and to abandon the false dichotomy between religion and real science.
This concise, very readable presentation of recent genetic research is completely accessible to the nonspecialist and makes for enlightening and fascinating reading.

Daniel J. Fairbanks is a distinguished university professor, research geneticist, artist, and author. He is the coauthor (with A. Franklin, A.W.F. Edwards, D.L. Hartl, and T. Seidenfeld) of The Mendel-Fisher Controversy, and (with W. R. Andersen) of Genetics: The Continuity of Life in addition to numerous journal articles.

Praise For Relics of Eden: The Powerful Evidence of Evolution in Human DNA…

"Brilliantly conceived, this excellent book shows how DNA sequences confirm the fact of human evolution. Wide ranging though not superficial, detailed though not technical, filled with fresh examples and engaging vignettes, the book is respectful of dissenting opinions but leaves literal creationists with no place to hide." —Daniel Hartl, Higgins Professor of Biology, Harvard University

"What an exciting surprise! Instead of the usual embryos and fossils, Fairbanks uses new molecular evidence. And he zeros in on a major controversy, the origin of humans and our relation to other primates. The arguments are presented with unusual clarity and they are overwhelmingly convincing."
—James F. Crow, emeritus professor of genetics at the University of Wisconsin, a member of the National Academy of Sciences, and author of Genetics Notes

"As Fairbanks sensibly reminds us, there is a time and place for science and for religion, both of which enrich the human experience. Anyone who is troubled by the seeming dichotomy between the two modes of inquiry may gain perspective and comfort from this fine book, which should be supplemental reading in every biology classroom." —Cecie Starr, author of Biology: The Unity and Diversity of Life
or
Not Currently Available for Direct Purchase
Copyright © 2020 American Booksellers Association