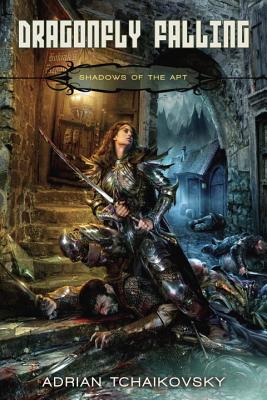 Dragonfly Falling (Shadows of the Apt)

Two young companions, Totho and Salma, arrive at Tark to spy on the menacing Wasp army, but are there mistakenly apprehended as enemy agents. By the time they are freed, the city is already under siege. Over in the imperial capital the young emperor, Alvdan, is becoming captivated by a remarkable slave, the vampiric Uctebri, who claims he knows of magic that can grant eternal life. In Collegium, meanwhile, Stenwold is still trying to persuade the city magnates to take seriously the Wasp Empire's imminent threat to their survival. In a colorful drama involving mass warfare and personal combat, a small group of heroes must stand up against what seems like an unstoppable force. This volume continues the story that so brilliantly unfolded in Empire in Black and Gold - and the action is still non-stop.

Adrian Tchaikovsky was born in Woodhall Spa, Lincolnshire before heading off to Reading to study psychology and zoology. For reasons unclear even to himself he subsequently ended up in law and has worked as a legal executive in both Reading and Leeds, where he now lives. Married, he is a keen live role-player and occasional amateur actor, has trained in stage-fighting, and keeps no exotic or dangerous pets of any kind, possibly excepting his son. Catch up with Adrian at www.shadowsoftheapt.com for further information about both himself and the insect-kinden, together with bonus material including short stories and artwork.
Loading...
or
Not Currently Available for Direct Purchase