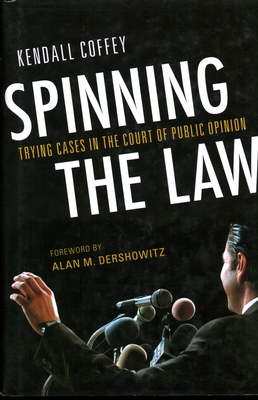 Trying Cases in the Court of Public Opinion

This behind-the-scenes analysis of media strategies used by attorneys in major courtroom battles presents an intriguing, often entertaining curriculum that they do not teach in law school or journalism classes. As the lead counsel in some of the country’s most notable cases and a savvy legal commentator with hundreds of television appearances, the author brings a distinctive combination of depth as a legal practitioner and experience as a media analyst to this insightful, provocative, and practical book.

He begins with an historic election fraud trial, relying on his personal experience with the basics of law spin. He guides the reader through an engrossing tour of spinning cases through the ages—including Socrates and Joan of Arc, as well as the Charles Lindbergh kidnapping. Modern cases include the O. J. Simpson trial, the author’s own experiences in the Elian Gonzalez controversy—and his thoughts on the possible overwhelming effect that case had on Florida in the controversial 2000 presidential election. The author also examines some of the most famous cases of recent times, including those of Michael Jackson, Kobe Bryant, Martha Stewart, Scott Peterson, Gordon "Scooter" Libby, and impeached former Governor Rod Blagojevich. Along the way, the author exposes many of the myths associated with the law, debunking assumptions about legal concepts ranging from circumstantial evidence and cooperating witnesses to so-called prosecutors’ vendettas.

The author's many entertaining examples and explanations make this book ideal reading for everyone fascinated by celebrity legal problems but must reading for lawyers, public relations professionals, journalists, and media students.

Kendall Coffey (Miami, FL), a former U.S. Attorney who headed up the largest federal prosecutors’ office in America, is the founding member of and a partner at Coffey Burlington, PL. Following his service as a U.S. Attorney, he was closely involved with the Elian Gonzalez case and the 2000 presidential election recount. A leading media commentator on high-profile cases, he has appeared on the Today show, Larry King Live, Good Morning America, Anderson Cooper 360, HLN, and numerous other nationally televised programs.
Loading...
or
Not Currently Available for Direct Purchase