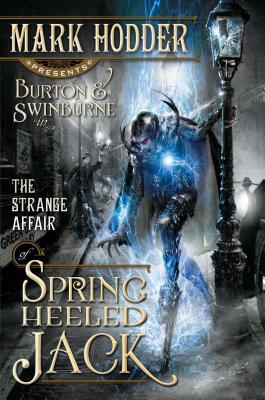 London, 1861. Sir Richard Francis Burton - explorer, linguist, scholar, and swordsman; his reputation tarnished; his career in tatters; his former partner missing and probably dead. Algernon Charles Swinburne - unsuccessful poet and follower of de Sade, for whom pain is pleasure, and brandy is ruin! They stand at a crossroads in their lives and are caught in the epicenter of an empire torn by conflicting forces: Engineers transform the landscape with bigger, faster, noisier, and dirtier technological wonders; Eugenicists develop specialist animals to provide unpaid labor; Libertines oppose repressive laws and demand a society based on beauty and creativity; while the Rakes push the boundaries of human behavior to the limits with magic, drugs, and anarchy. The two men are sucked into the perilous depths of this moral and ethical vacuum when Lord Palmerston commissions Burton to investigate assaults on young women committed by a weird apparition known as Spring Heeled Jack, and to find out why werewolves are terrorizing London's East End. Their investigations lead them to one of the defining events of the age, and the terrifying possibility that the world they inhabit shouldn't exist at all!

Mark Hodder is the author of The Strange Affair of Spring Heeled Jack-winner of the Philip K. Dick Award 2010-and its sequel, The Curious Case of the Clockwork Man. He's the creator and caretaker of the Blakiana website (http://www.sextonblake.co.uk), which he designed to celebrate, record, and revive Sexton Blake, the most written-about fictional detective in English publishing history. A former BBC writer, editor, journalist, and Web producer, Mark has worked in all the new and traditional medias and was based in London for most of his working life until 2008, when he relocated to Valencia in Spain to de-stress and write novels. He has a degree in cultural studies and loves British history (1850 to 1950, in particular), good food, cutting-edge gadgets, cult TV (ITC forever!), Tom Waits, and a vast assortment of oddities.
Loading...
or support indie stores by buying on