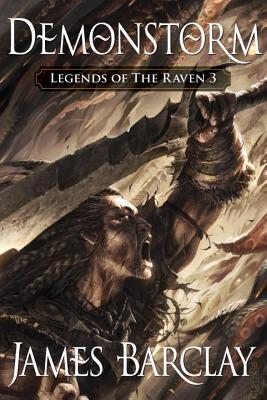 Demonstorm (Legends of the Raven #3)

THIS IS THE END.... The dragons have gone home, the elves are safe. The Raven have kept their promises. But fate has not finished with them. As the war between the colleges rages on, an old enemy senses that his chance to revenge a bitter defeat has come. Tessaya, Lord of the Paleon Tribes, has waited patiently for his moment and now, with Balaia in flames, he makes his move and unleashes the Wesmen hordes. In Xetesk, his forces scattered, Dystran, Lord of the Mount, faces certain defeat by the Wesmen unless he unleashes the horrfying power of dimensional magics. And Dystran has not come this far to be beaten at the last by a rabble of ignorant tribesmen. And so the veil between dimensions is torn.... And beyond, a predatory evil stirs. Demons catch the scent of countless souls in Balaia.
Can even The Raven prevail when the world is coming to an end? A fantasy milestone is reached. James Barclay brings his sensational saga of The Raven to a heart-stopping conclusion.

Praise For Demonstorm (Legends of the Raven #3)…

"A terrific final tale as grim and eerie as the previous ones. Action-packed and fast-paced, fans will relish this deep tale with a message for leaders to lead for the benefit of all and not just to grab more power at the cost of others. James Barclay provides a great ending to his profound two sagas as all of the books focus on the abuse and misuse of power in what are some of the best political military thrillers in years."
--Midwest Book Review

James Barclay is in his forties and lives in Teddington in the UK with his wife and son. He is a full-time writer. Visit him online at www.jamesbarclay.com.
Loading...
or
Not Currently Available for Direct Purchase