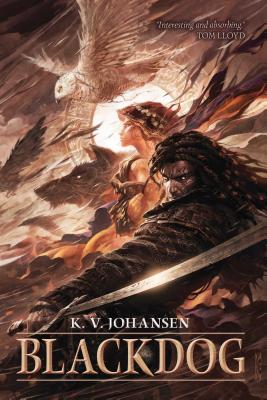 Blackdog (Gods of the Caravan Road #1)

In a land where gods walk on the hills and goddesses rise from river, lake, and spring, the caravan-guard Holla-Sayan, escaping the bloody conquest of a lakeside town, stops to help an abandoned child and a dying dog. The girl, though, is the incarnation of Attalissa, goddess of Lissavakail, and the dog a shape-changing guardian spirit whose origins have been forgotten. Possessed and nearly driven mad by the Blackdog, Holla-Sayan flees to the desert road, taking the powerless avatar with him. Necromancy, treachery, massacres, rebellions, and gods dead or lost or mad, follow hard on the their heels. But it is Attalissa herself who may be the Blackdog’s—and Holla-Sayan’s—doom.

Praise For Blackdog (Gods of the Caravan Road #1)…

"Interesting and absorbing; Blackdog takes as its heart, and its strength, a subject that most fantasy writers shy away from—the Gods themselves."
TOM LLOYD, Author of The Twilight Reign series

K. V. Johansen grew up in Kingston, Ontario, Canada, where after reading The Lord of the Rings at the age of eight she developed not only a lifelong love of fantasy literature, but a fascination with languages and history which would be equally long lasting and would eventually influence the development of her own writing, leading her to take a Master’s Degree at the Centre for Medieval Studies at the University of Toronto. The love of landscape and natural history that appears in her work also traces to an early age, when she spent countless hours exploring woods and brooks with her dog. While spending most of her time writing, she retains her interest in medieval history and languages and is a member of the Tolkien Society and the Early English Text Society, as well as the Science Fiction Writers of America and the Writers’ Union of Canada. Her previous fiction for adults include the Sunburst-nominated Blackdog and the short story collections The Storyteller and The Serpent Bride. She is also the author of a number of books for children and teens and two books on the history of children’s fantasy literature. Various of her books have been translated into French, Macedonian, and Danish. Visit her online at www.kvj.ca .
Loading...
or support indie stores by buying on