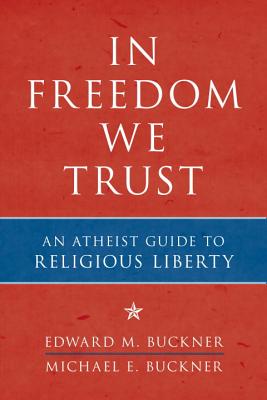 In Freedom We Trust

An Atheist Guide to Religious Liberty

These contentious issues are not just recent developments but were also the topics of fierce debate in the late eighteenth century. Like President Obama today, President Thomas Jefferson had to contend with accusations that his religious convictions were questionable. Against complaints that the writers of the Constitution did not invoke God, John Adams replied, "It will never be pretended that any persons employed in that service had interviews with the gods."

This book covers these and other related issues from the two-centuries-long debate over religion and secularism in America. Taking an unabashedly atheistic point of view, the father-and-son authors argue that everyone--from evangelical Christian to ardent atheist--needs a secular America and separation of church and state. They examine the decidedly unchristian roots of the Fourth of July, the important difference between "tolerance" and "toleration," the misleading confusions related to the difference between "public" and "governmental," the value of secular schooling, the erroneous contention that atheism is equivalent to immorality and therefore dangerous, and a host of other contemporary and historical topics.

With a list of key dates related to the history of secular America, notes, bibliography, and glossary, In Freedom We Trust offers important facts and arguments for secular humanists and anyone with an interest in freedom of conscience.

Praise For In Freedom We Trust: An Atheist Guide to Religious Liberty…

"Edward and Michael Buckner know what they are talking about, and they bring the full force and depth of that knowledge to this extraordinary book. At turns passionate and reflective, serious and light, In Freedom We Trust is a major contribution to understanding how religion and government intersect in the United States - and how they do not and must not. Most of all, the Buckners make a powerful case for the importance of getting this right, in the interest of all Americans - religious and nonreligious alike."
- Dale McGowan, PhD, Professor and author of Parenting beyond Belief and Atheism for Dummies

"Writing with a clear voice and a generous spirit, the Buckners provide a much-needed reminder of the core value of religious freedom - including the right not to believe. This rousing defense of secular government deserves wide dissemination. I wish someone would read it to Pat Robertson!"
- Rob Boston, Senior policy analyst, Americans United for Separation of Church and State


"Edward and Michael Buckner have written a rousing, lucid, and highly entertaining guide to why the United States is, and should continue to be, a secular nation that protects all its citizens' freedoms equally - be they of this religion, that religion, or no religion at all. The Buckners do a thrillingly effective demolition job on the myths and lies peddled by those who want to turn America into yet another theocracy, and spell out exactly why they are, in reality, deeply un-American."
- Stephen Law, Senior lecturer in philosophy, Heythrop College, University of London,
and author of Believing Bullshit


"A must-read book for the secularist who wishes to argue on a factual basis, but even more relevant for those open-minded religionists (they are out there) who may disagree with the Buckners about the import of faith but share their priority to defend the separation of church and state."
- Massimo Pigliucci, Professor, City University of New York


"In this readable, well-documented book, both seasoned debaters and inquiring minds will find solid arguments for why we can be either a free nation or a Christian nation, but not both, and why the religious liberty of each individual can be protected only if everyone's religious or nonreligious liberty is equally protected."
- Herb Silverman, Founder and president of the Secular Coalition for America and author of Candidate without a Prayer

Edward M. Buckner, PhD (Smyrna, GA), formerly the president of American Atheists and executive director of the Council for Secular Humanism, is now a member of the board of directors of American Atheists. He contributed to The New Encyclopedia of Unbelief (edited by Thomas W. Flynn) and the Fundamentals of Extremism: The Christian Right in America (edited by Kimberly Baker), among other publications.

Michael E. Buckner (Decatur, GA) is the coeditor of Quotations that Support the Separation of State and Church with Edward M. Buckner, among other publications. He is the vice president of the Atlanta Freethought Society.
Loading...
or
Not Currently Available for Direct Purchase